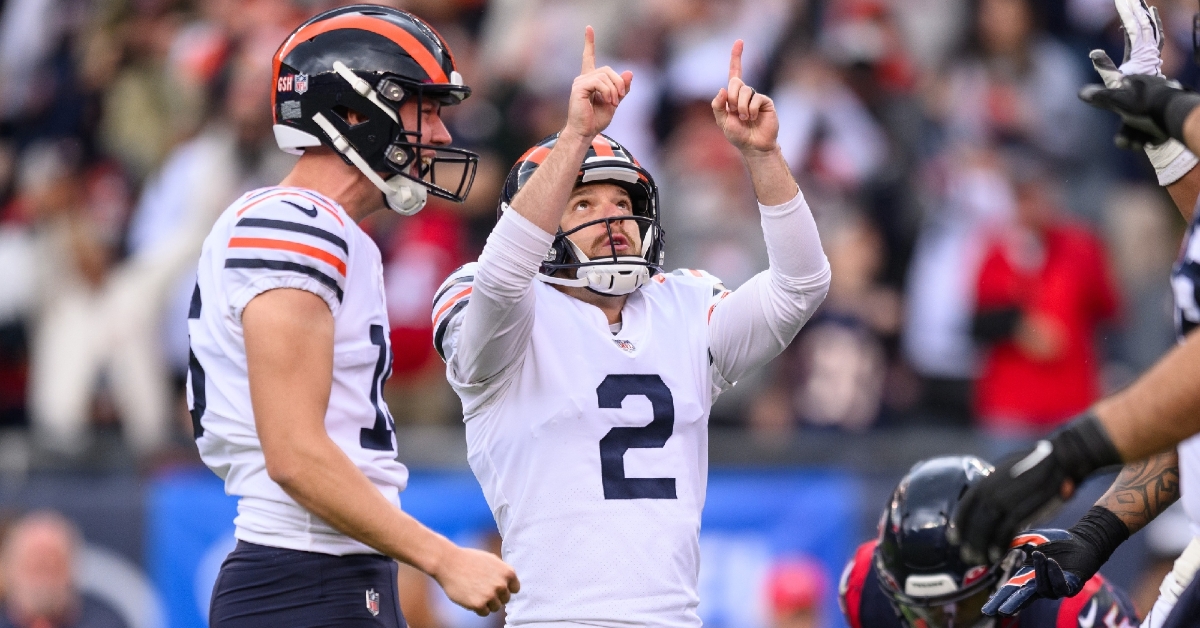 CHICAGO - Looking to remain in first place in the NFC North, the Chicago Bears (2-1) played host to the Houston Texans (0-2-1) as they welcomed former head coach Lovie Smith back to Soldier Field. It wasn't all sunshine and roses as Justin Fields struggled throwing the ball, and David Montgomery was lost early with an injury.

All that matters is finding a way to win a football game, and by the leg of Cairo Santos, it was the Bears grabbing a massive win at home, 23-20. At some point, Luke Getsy and the Bears coaching staff need to trust Fields, but when he plays like this, how can you? Not only was he just 8-17 for 105 yards, but he threw two more interceptions and no touchdowns as he continues to struggle.

At least his legs still work, which was evident on the Bears first possession as his 29-yard scamper but the ball inside Houston territory. The Bears were unable to do much after that, but it was Santos cashing in with a 47-yard field goal to give the Bears a 3-0 lead. Things continued to go well for the Bears on their second possession, except for Montgomery getting hurt early on the drive. He would leave the game and not return as it would be the Khalil Herbert show the rest of the way.

Already set up in Texans territory after the 41-yard run from Equanimeous St. Brown, Herbert started to take over as he picked up more than 30 yards on the drive capped off by his 11-yard score for the early 10-0 lead. One thing Bears fans have grown to know about Smith and his teams are that they will always have great fight.

Houston continued to show that after falling behind by two scores and put together an incredible drive to keep things close. Three plays into their drive saw Davis Mills go up top to Chris Moore for 52 yards, as that was the big play the offense needed. Dameon Pierce would then put the ball on the turf one play later, but the Texans were fortunate enough to recover that fumble. Three plays later saw Mills find Jordan Atkins for the four-yard score and a 10-7 game.

Two plays into their next drive saw Fields intercepted for the first time, and just like that, the Texans had the ball inside Chicago territory. Fortunately, Houston returned the favor four plays later as Eddie Jackson picked off Mills in the endzone to kill the drive. Don't look now, but Jackson has gotten off to a great start, which is huge for the Bears defense.

Unfortunately, for the Bears, their offense started to stall out as their next two possessions ended in punts; it was the Texans who put together the next scoring drive with Pierce carrying the ball all four times for 41 yards, including his one-yard plunge to put the Texans in front 14-10.

Looking for another score before the half, the Bears rushing attack got things rolling as Fields and Treston Ebner got the ball moving. Fields would eventually find Cole Kmet for a big play, but they also had to endure a sack and recover a fumble to kill the drive. Chicago did manage to come away with points, with Santos connecting from 50 yards to pull the Bears within 14-13 at the break.

Like the first half, when their offense got rolling, Houston started the second half similar to the first as they settled in immediately. Mills used his arm to open the drive finding Pierce and Atkins for a pair of first downs. Several short passes later found the Texans in field goal range, where Kai Fairbairn knocked it home from 39 yards out to extend the lead to 17-13.

It took just three minutes for Chicago to respond as they needed just five plays to go 75 yards. A 52-yard burst from Herbert certainly helped as he finished the day with 157 yards on 20 carries. Fields would hook up with St. Brown for 20 more yards before Herbert finished the drive with his second TD to make things 20-17. Both were career highs.

That would be the last time the Bears would touch the ball until late in the third as the Texans orchestrated a 14-play 70-yard drive that took over seven minutes off the clock. Pierce was a big reason why touching the ball on five of the first six plays before Nico Collins hauled one in for 22 yards. Another first-down completion to Phillip Dorsett moved the ball inside the 20, where Fairbairn tied things up from 23 yards out.

Things went bad from worse for the Bears at that point, with Fields looking for Darnell Mooney only to get intercepted for a second time. The fourth quarter was a quarter to forget for both sides as their first four combined drives ended in punts while the fifth drive ended via a turnover.

The Bears defense came through when they needed to the most as Roquan Smith picked the perfect time to come away with another interception and returned it 18 yards inside the Houston 20. At this point, there was a minute left in the game, and one could safely assume that, barring a catastrophic disaster, the Bears would be able to salt things away.

A Herbert rush and two Fields knees set up Santos for what was going to be a chip shot field goal attempt. One of the most accurate kickers since the end of the 2020 season, Santos sent Chicago fans home happy as his 30-yard field goal with no time left gave the Bears a massive 23-20 win.