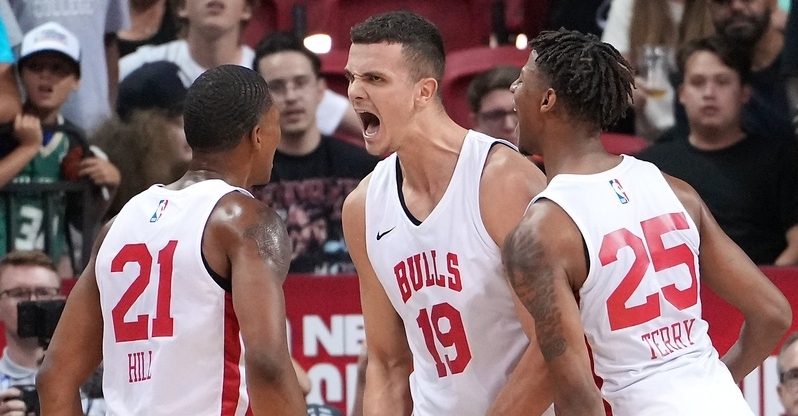 OSHKOSH - The Chicago Bulls weren't the only Chicago area team in action on Friday as the Windy City Bulls (1-0) kicked off their 2022-23 G-League season against the Wisconsin Herd (0-1). This is game one of a weekend home and home where Windy City will host Wisconsin on Saturday.

Over the past two seasons, the Herd has set the standard for G-League success and a level that the Bulls would love to reach. That all starts with successful coaching and having a group of players that are not only talented, but are willing to put in the work to get better. If Friday indicates what is to come this season, it could be a great year as Windy City kicks things off with a 115-110 win.

When it comes to the G-Leauge, you have your two players who can play both in the NBA and the G-League, and then you have your regular G-League roster players who are hoping for an opportunity. For the second year in a row, all eyes will be on Marko Simonovic and his development in now his third season in the organization.

Since being drafted in the second round of the 2020 NBA draft, Simonvic has been a bit of a mystery as he has played next to no minutes in the NBA. However, his G-League numbers have been great, and he kicked off a new season with a 19-point eight-rebound performance. Not bad for a guy who saw little action during the preseason also.

For as good as Simonovic was, he was not the best player on the court, as that belonged to Chris Clemons. The Former Campbell star put on a clinic in his 24 minutes, displaying a great touch from distance to finish with a game-high 25 points. Another sharpshooter for Windy City happens to be Ethan Thompson, as he played a team-high 38 minutes and added 20 points of his own to give the Bulls a nice three-man combo.

While those three did a lot of the heavy lifting on Friday, Windy City had plenty of contributions from various talented players. Fellow two-way player Kostas Antetokounmpo put on a good show in his first game with the Bulls as he finished with 14 points and seven rebounds. Add in 13 points from Henry Drell, 10 from Carlik Jones, and 11 from Javon Freeman-Liberty, equaling 112 of their 115 points. Anthony Tucker had the remaining three points for Windy City.

Much like the Milwaukee Bucks, who have gotten off to a blistering start, the Herd boasts one of the best offensive teams in the G-League and can flat-out shoot the rock. However, this night, there was not one stand-alone player that you could point to as the game-changer. Instead, a large number of players that did what they needed to do to give the Herd a chance to win.

Lindell Wigginton led the way for the Herd, finishing with 17 points and five assists. Joining him were Jontay Porter (16), Joe Wieskamp (16), and Rob Edwards (15), as they all provided a nice scoring punch for the Herd. With the Bulls having their own Antetokounmpo brother, it was a mini family reunion on the floor with Alex Antetokounmpo suiting up for the Herd.

Unlike his brother Kostas who had a great game, Alex struggled to see the floor and came away with four points in just eight minutes. With Jordan Bone, Ibou Badji, and Elijah Hughes adding double-digit scoring games, it would have been interesting to see the difference Alex could have made had he done that also.

Windy City will return to the court on Saturday when they host the Herd for their home opener at the newly named NOW Arena. The tip-off is set for 7 PM.