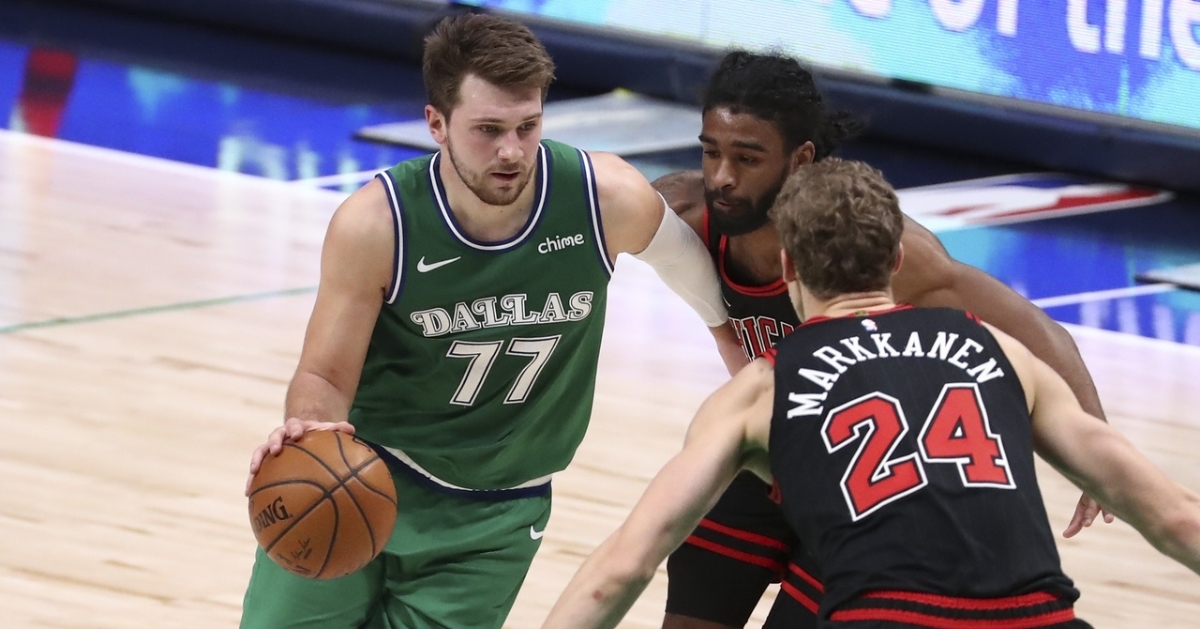 DALLAS – Despite a down night from Zach Lavine, who scored 10 points on one of eight shooting, it was the Bulls bench that came up huge against the Dallas Mavericks. Led by Garrett Temple and his 21 off the bench, Thaddeus Young (15) and Otto Porter Jr (14) helped the Bulls withstand a Luka Doncic triple-double to pick up a 117-101 victory on the road. It was a nice bounce-back win for Chicago after their meltdown in Oklahoma City, and Doncic later said his effort was more selfish than impressive.

Continuing to improve as an offensive player, Wendell Carter Jr got the Bulls offense started, scoring the first five points for Chicago. After Willie Cauley-Stein opened the scoring for Dallas, it was Doncic getting going early, scoring nine of the team's next 11 points to give Dallas the 12-7 lead. Now in just his second game back after missing time with COVID tracing, Lauri Markkanen continues his hot shooting as he led Chicago with 29.

With both Lavine and Coby White struggling early, it was up to Markkanen and the rest of the offense to pick up the slack early. Down by seven midway through the first, Patrick Williams got the Bulls offense back on track before Temple, and the bench started to make their presence felt. Down 19-18 following a pair of Lavine free throws, Daniel Gafford gave the Bulls the lead with two straight buckets, and they never looked back. Young closed out the first quarter with two buckets of his own, and the Bulls held a 27-23 advantage after one.

The Bulls bench continued to lead the way early in the second, with Gafford once again getting inside as he finished the night with seven points. Temple and Young answered that bucket, and just like that, the Bulls built a 33-23 lead. Up 12 following a Porter Jr bucket, Kristaps Porzingis put an end to the Bulls run as he was hoping to get the Mavs offense back on track. Fortunately for Chicago, Temple led the way as he put home 15 second-quarter points en route to a 17-point first half.

Down by double digits for much of the quarter, Doncic took it upon himself to try and lead the Mavericks back. Fortunately for Chicago, they had their answers with Markkanen continuing his hot shooting from deep to put the Bulls up 14. For the most part, it was a two-man game the rest of the quarter for each side, with Doncic and Porzingis leading the way for Dallas and Temple and Markkanen pacing the Bulls as they were in complete control 67-52 at the half.

Hoping to avoid another second-half letdown as they did on Friday, Chicago started the second half with Lavine's only made field goal before Carter Jr went back at it on the inside. Cauley-Stein and the Mavericks tried to answer, but the Bulls were standing their ground. Up 18 following a Markkanen made three, both Porzingis and Doncic put it on themselves to lead the team back. Whenever it felt as if momentum was shifting toward Dallas, the Bulls had an answer with Williams, this time providing a big three.

Dallas continued to battle back with Wes Iwundu, helping the Mavericks close the gap to single digits for the first time since the first quarter. Once again, it was time for the Bulls to answer, with Ryan Arcidiacono knocking down the big three to push the lead back to 12. Young then came off the bench to pick up the quarter's final six points for Chicago as they headed to the fourth leading 89-75.

Typically, this has been when the Bulls begin to fade, but not on this night as Markkanen and Porter Jr picked up two buckets early. James Johnson and Porzingis did their best to answer, but once again, it was Temple and the Bulls bench weathering the storm keeping a double-digit lead. Four more points from Young and then another bucket from Porter extended the Bulls lead to 18, but Porzingis and Josh Green helped the Mavericks close within 14.

An Iwundu three made things an 11-point game before Markkanen drooped a dagger with a long three-pointer. The Bulls continued to make their shots down the stretch, with Markkanen and the bench leading the way. Fortunately for Chicago, they were able to keep Doncic in check after he dropped 30 in the first half holding him to just nine second-half points. That proved to be a big difference in the second half, with Chicago picking up the 117-101 win.

With the win, the Bulls move to 5-8 on the season but could be an above .500 team if they could consistently close out games.

They return to the Court tonight as they host the new-look Houston Rockets. Victor Oladipo is expected to make his debut in the matchup.