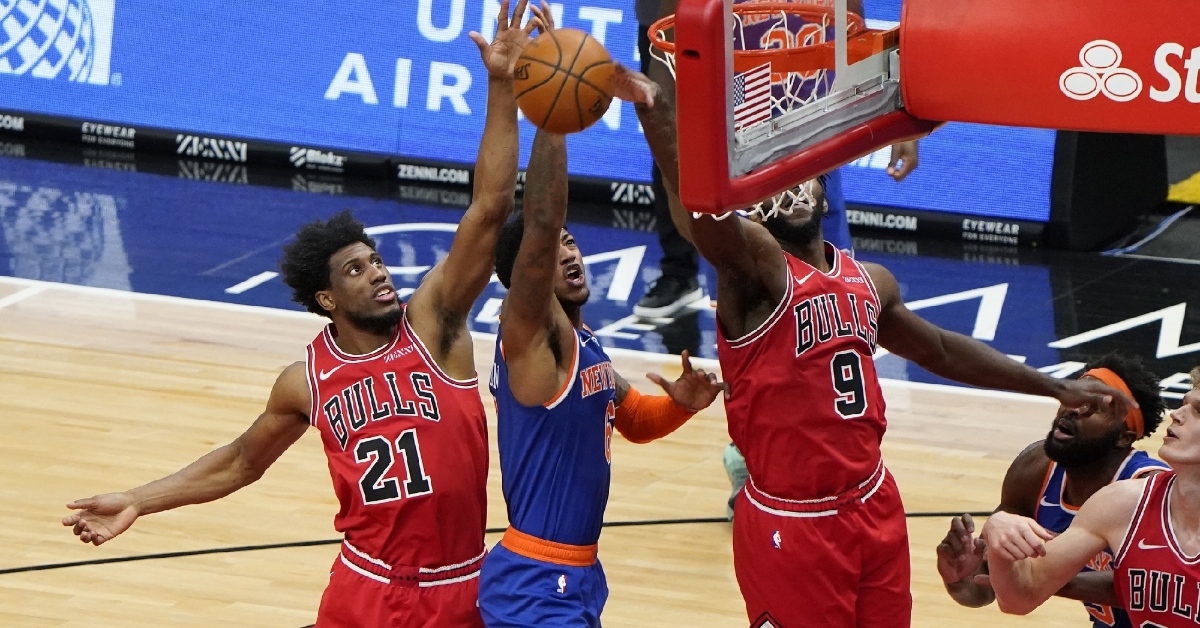 Looking for two wins in three days against the Knicks, the Bulls needed a furious second-half comeback for that to happen. After a miserable first three quarters that saw the Knicks hold an 18-point lead at one point, the Bulls got back to playing Bulls basketball in the fourth.

The defense tightened up to force turnovers, the team was getting out in transition, and most importantly, the ball movement improved to cut the lead to three. Unfortunately for Chicago, that would be as close as they would get as Julius Randle and company held off the Bulls rally for the 107-103 win.

Talk about a difference in two games.

Whatever the Bulls did on Monday wasn't working Wednesday as the Knicks hit them in the mouth early. Led by Randle and his impressive 13-point first quarter, the Knicks got out to an early lead and never looked back. After the Bulls duo of Lauri Markkanen and Zach Lavine kept things close early, New York went on a 12-4 run to give New York a comfortable 18-8 lead. That lead continued to grow with R.J. Barrett and Elfrid Payton getting involved as the Bulls had no answers.

Now down 16 after consecutive Randle three's, Coby White put an end to the run, hoping to jumpstart the stagnant offense. Tomas Satoransky was getting involved in the closing minutes, but it was the Knicks doubling up Chicago 34-17 after one. We have seen the Bulls play from behind quite a bit this season, but trailing by 17 after one was a tall task to ask of anyone.

Led by Garrett Temple, Denzel Valentine, and the rest of the bench to open the second, Chicago had some momentum as they closed with 12 at 39-27. That was until Obi Toppin drained one from deep ahead of the Nerlens Noel alley-oop pushed the lead back to 15. Hoping to get something going, it was time for Lavine and Markkanen to sink their teeth in with the duo bringing things back to being a 10-point game.

Like much of the first half, New York had answers for every Bulls run, with Mitch Robinson getting involved in Barrett's action leading the offensive charge to stretch the lead back to 16. New York maintained their momentum for the rest of the quarter, but credit White, Lavine, and Thaddeus Young down the stretch as they put Chicago within striking distance at 63-52 at the half.

Still down by double figures to open the second half, the Bulls felt much better after how the second quarter played out. Patrick Williams opened the second half scoring for the Bulls, but Barrett picked up where he left off to keep the Knicks in front by double digits. A Daniel Gafford dunk closed the gap to 10 once again, but that was until the Bulls play went south.

Despite Randle cooling off after his impressive first quarter, New York didn't miss a beat as it was their bench outplaying the Bulls bench in this one. A big reason for that was Payton, who put together one of his best outings of the season. With the Knicks now continuing to build on their lead, Randle started to get involved again, with Reggie Bullock getting in on the action to push the lead to 19. That was the largest lead of the night for New York.

Young and Lavine's two-person game cut the lead to within nine late in the third, but once again, Chicago couldn't get closer as Randle knocked down another three. New York ultimately led 91-76 after three leaving the Bulls with an uphill climb and just 12 minutes to work with.

One thing that has stood out with these Bulls so far this season is their heart. I would argue that this team has more heart than anyone, and they were about to show everyone why. Down 18 after a Rivers, three, Valentine and Williams put in 12 of the Bulls next 14 points to suddenly close the gap to 97-90. After Randle made things a nine-point lead yet again, it was Williams hitting on a tough runner ahead of a Gafford dunk, and suddenly we had a 99-94 game.

Looking to weather the storm, the Bulls defense forced a turnover as Lavine led the break to find Markkanen closing the gap to three. Bullock came through in desperate need of a big shot as his corner three stopped the momentum shift to give the Knicks a two-possession lead. Payton pushed the lead back to eight before the Bulls looked to come back one last time.

White knocked down a corner three to cut the lead to five as it was time for the defense to come up with a stop. Knowing that New York went to their big man, Randle found the bottom of the net once again, delivering the dagger to make things 106-99. Lavine and Young were able to hit buckets down the stretch, but it wasn't enough as the Knicks held off the Bulls rally for the 107-103 win.

Despite the loss, which sent the Bulls to 8-12, their fight in the fourth stood out as they refused to quit. If they can match that effort for an entire 48-minutes great things will happen for this team. Lavine led Chicago with 24 points, while Young had a monster night off the bench scoring 19.

Valentine added 13 of his own off the bench, with White and Williams chipping in with 13 and 12 apiece. Randle led all scorers with 27 as New York received a 20-point effort from Payton and 17 more from Barrett.

Chicago will be back on the floor this weekend for a double-dip with Orlando.