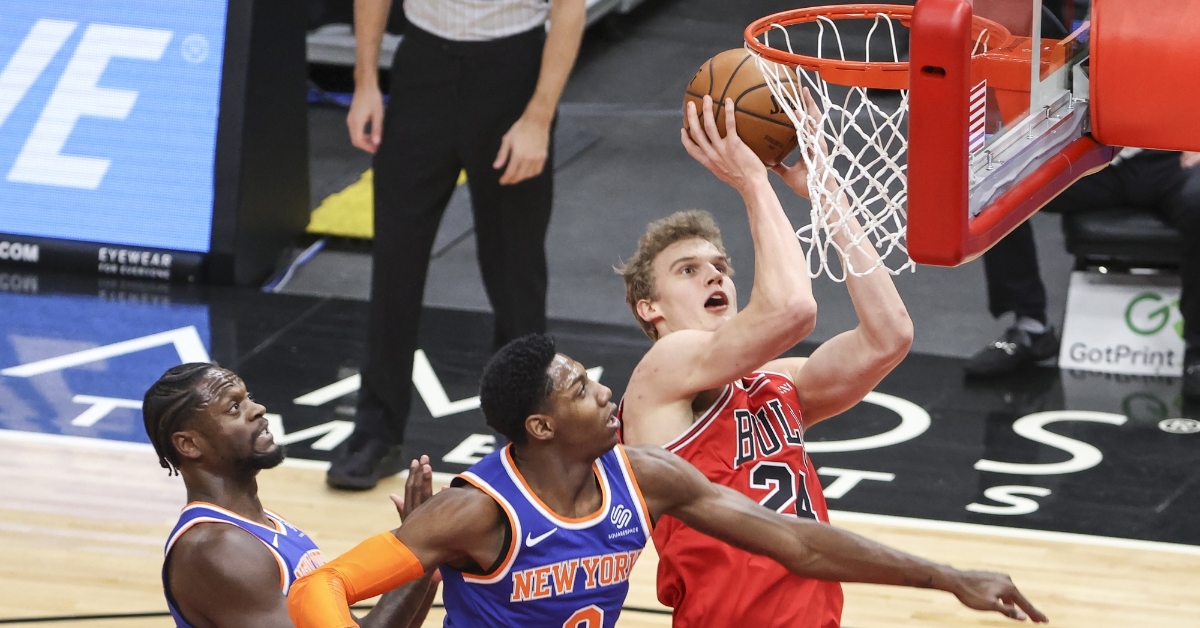 Although the Bulls entered Monday night's contest with a 7-11 mark, there are very much in the thick of things for the final post-season spot. For the Bulls to have any hopes of making the postseason, they need to win games they should win and beat teams in a similar position to them. That was precisely the case Monday as Chicago took down their former Coach Tom Thibodeau and his New York squad 110-102.

A lot has been said about Lauri Markkanen and his inconsistencies the past few seasons, but he has been the best player on the floor in recent games. Markkanen led the way in scoring for the second straight game, dropping 30 points or more once again. While Patrick Williams and Coby White were picking up the offense early, Markkanen got involved with the deep three as his outside game has been soaring.

The Knicks have been one of the more surprising teams so far this season, but with Thibodeau, their coach is really a surprise? With second-year player R.J. Barrett leading the offense with Julius Randle, the Knicks have a terrific one-two punch to build around as they got going early. Add in some Elfrid Payton contributions, and the Knicks held the early lead.

Down by a pair midway through the first, White and Markkanen put home six straight points to give the Bulls the lead. After Garrett Temple pushed the lead to 22-16, the Bulls went on another 8-3 run to extend their lead to 30-19. Refusing to let things getaway, it was the Knicks bench that outplayed the Bulls second unit early on, with Austin Rivers, Immanuel Quickley, and Obi Toppin closing the gap to 30-27 following an 8-0 run. Chicago led 32-27 after one.

Like most games this season, the Bulls second unit was settling in, but the Knicks bench had the hot hand early. Not only were they get contributions from their typical players, but guys like Alec Burks and Nerlens Noel were now getting going too. After a second straight game without a first-quarter field goal, Zach Lavine scored his first points of the night in the second ahead of a Daniel Gafford put-back slam.

These photos were taken almost exactly one year a part from each other ??@ZachLaVine | #NBAAllStar pic.twitter.com/L7cbQalEoX

Gafford continues to play a vital role as he remains in the starting lineup for the injured Wendell Carter JR.

Up five, Lavine connected again before Denzel Valentine got on the board as Chicago maintained a seven-point lead. Whenever it looked like the Bulls were about to blow things open, the Knicks had an answer as Randle put his full arsenal on display to close the gap to two. Still, down three, Randle closed the gap to one before the Mitch Robinson tip gave the Knicks their first lead since early in the first. Thaddeus Young put the Bulls back in front, with White and Markkanen closing out the scoring to hold a 59-55 halftime lead.

As if a strong first-half showing wasn't enough for Markkanen, he opened the second half scoring with a three to stretch the lead back to seven.

Another 30-piece for Lauri Markkanen!

White and Gafford get the offense rolling, but the Knicks countered with Barrett and Reggie Bullock to keep the deficit in single digits. Markkanen continued to lead the Bulls offensive attack, but Lavine was heating up too, giving the Bulls an 11-point lead.

That 11-point advantage didn't last long as, once again, the offensive arsenal from Barrett and Randle were taking center stage. Not only do they have the size and strength to get inside, but both showed great touch on their jumpers keeping New York within Striking distance all night. If it weren't for some Otto Porter Jr. free throws in the closing minutes, New York would have taken the lead, but it was the Bulls holding on to an 84-81 lead after three.

If the Bulls wanted to win this game, it would come down to their defense, who played one of their better games of the season. After a Gafford dunk made things 87-83, Quickley cut things to one hitting another three-point shot. Chicago continued to go inside with Young and Gafford. Now was the time for the Bulls to dig their teeth in defensively.

With every passing possession, the Bulls played with more confidence, especially when Lavine hits the shots he hits in the fourth. However, the Knicks played with the same amount of intensity and were able to retake the lead 95-94 following buckets from both Burks and Quickley. Down by a point, Young once again gave the Bulls a one-point lead before Lavine pushed the lead to 100-97.

With less than a minute to go, the Knicks drew even once again as it was Burks' turn to knock down a three. The ensuing possession saw the Bulls demonstrate some of their best ball movement and were rewarded by White's corner three, proving to be the game-winning bucket. Lavine went down and delivered the dagger on the next possession as the Bulls defense took over down the stretch ending the game on a 10-2 run to preserve a 110-102 win.

Markkanen led all scorers with 30 points, with Lavine adding 21 of his own. Young added 13 off the bench joining White with 13 with Gafford (12) and Williams (10) landing in double figures. Randle led the way for the Knicks with 23.

The win moves the Bulls to 8-11 on the season, and they will face the Knicks again tomorrow.