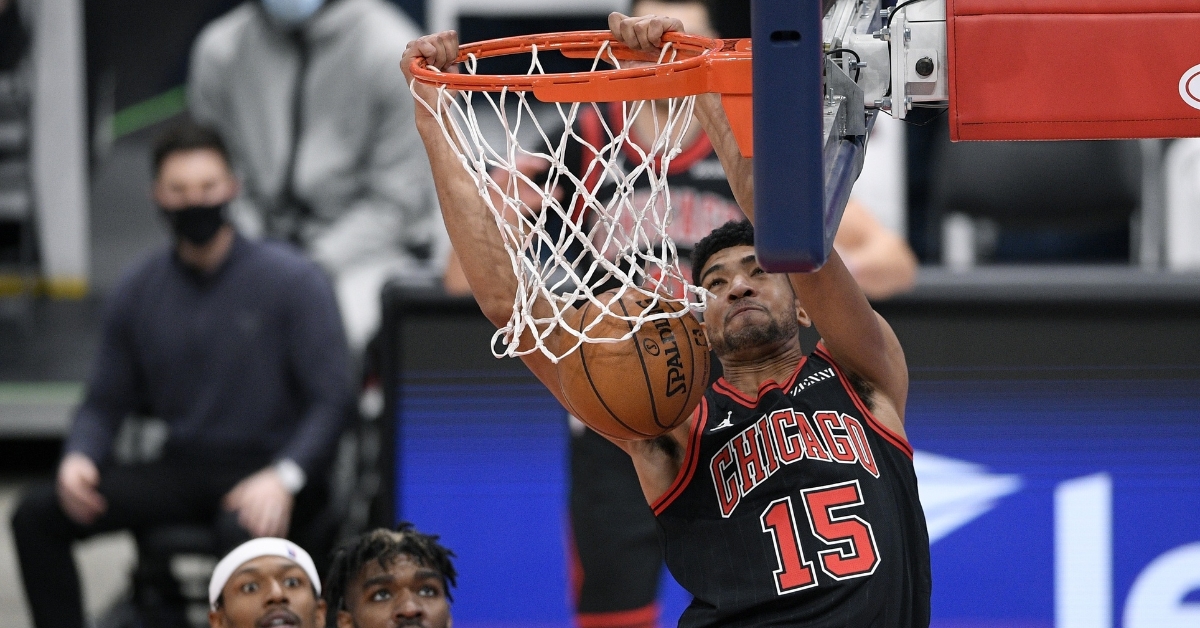 It took four games, but Billy Donovan has officially notched his first of what hopefully will be many wins for the Bulls. Led by Zach Lavine's 23 and a balanced scoring attack that saw the Bulls land seven players in double figures, including four starters, Chicago managed to hold off winless Washington 115-107 for their first win of the season.

Sometimes all it takes is a change of scenery as the Bulls were unable to win a single game at home to start the season. Granted, the defense still isn't where it needs to be, but this was the first time all season where the Bulls looked like the team fans hope they will. Early on, Lavine and Coby White carried the offense in the first quarter, accounting for the Bulls first seven. The Bradley Beal and Russell Westbrook connection will take a bit to get going, but good things will happen in DC with those two on the floor.

Tied 7-7 in the first, Thomas Bryant scored the next for Washington ahead of Lauri Markkanen and his three to once again tie things up 12-12. Otto Porter Jr continues to adjust to his new role off the bench, but it was his mid-range jumper that not only gave the Bulls the lead in the first, but basically, it was a lead Bulls refused to give up. Holding a two-point lead, the Bulls bench started to get involved with Porter Jr and Garrett Temple getting in on the fun, pushing the lead to 27-20. Markkanen closed out the quarter for the Bulls, but Ish Smith and Davis Bertans managed to keep things within striking distance down 31-26 after one.

The second quarter has been the Bulls biggest demise thus far this season, and early on, it appeared to be heading that direction. Led by the trio of Westbrook, Smith, and Bertans, Washington opened the quarter up on an 11-4 run to retake the lead 37-35. White and Porter answered by scoring the next nine for Chicago putting them back in front 44-40. After a brief period where both teams couldn't get much going offensively, Lavine and Porter connected on a pair of threes, with Westbrook providing the rest of Washington's offense. Porter Jr had a huge first half for the Bulls, helping them hold a 52-46 lead after one half of play.

In unfamiliar territory, the Bulls held their first lead at the half this season and were hoping to build on that effort. Following four quick points from Beal and Bryant, Patrick Williams stepped behind the arc knocking down the three to push the lead back to five. Williams followed that up with a mid-range jumper as the Bulls lead was back to their largest of the night. Desperate for a win, Washington turned to Beal and Westbrook to keep things close, with Deni Avdija getting in on the fun.

With Williams providing lots of offense in the third, Wendell Carter Jr and Chandler Hutchison chipped, helping keep the lead at eight points. That set Lavine and White's tone to take over to close out the quarter, with the Bulls eventually building a 12-point 83-71 lead and leading 83-73 after three.

Chicago had 12 minutes standing in their way from their first win and wanted to put Washington in panic mode early. Not only did they hold a double-digit lead after three, but Chicago wasted no time getting going in the fourth as the Tomas Satoransky three ignited what was a 9-0 run to stretch the lead to 92-73. Looking for offense in a hurry, Bertans connected on a pair of three's, but it was White with the answer keeping things at 16 points.

Now up 17 following another Satoransky three, it was only a matter of time until the Bulls could celebrate for the first time this season. Unfortunately, Bertans had the hot hand once again as he teamed up with Avdija eight straight Wizard points before Beal closed the gap to 10 at 107-97. Chicago continued to keep the pressure on with both White and Temple knocking down shots, but this was the for Washington to get their stars going.

A Westbrook three followed by a Beal jumper closed the Bulls lead to single digits 111-102. That was as close as Washington would get, with Lavine and Porter capping off Chicago's scoring as the Bulls hold tough for the 115-107 win. With the win, Chicago now moves out of the Central Division's basement, and Donovan and Co can celebrate for the first time.

The Bulls are back on the same floor tomorrow, facing off against Washington once again.