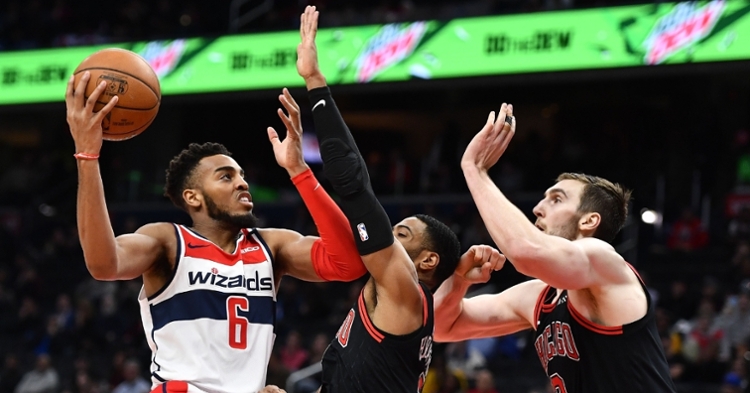 The Chicago Bulls couldn't be happier for the all-star break to arrive as things haven't been too kind lately. Not only has Chicago suffered their fair share of injuries the past two months, but a team that was just three games out of the No. 8 seed in the east has fallen well behind the back as they are now 19-36 following a sixth straight defeat.

Last night was a classic tale that one person cannot carry a team as Zach Lavine dropped 41 points in the 126-114 loss to the Washington Wizards (19-33), who themselves leaped the Bulls in the standings. Help is on the way in Chicago; however, as both Otto Porter Jr. and Wendell Carter Jr both plan to make their return from injuries shortly after the all-start break ends.

New to the starting lineup as the injuries piled up have been Thaddeus Young and Luke Kornet as both scored the team's first buckets of the game. Led by Bradley Beal, Ish Smith, and Ian Mahinmi, the Wizards used an early 13-2 surge to take control of the first quarter 13-4. Tomas Satoransky and Chandler Hutchison put an end to that run as nearly half of the quarter went by before Lavine got his first points of the night. He then went on to score six straight points to turn a 24-12 deficit into a 24-18 deficit before the Wizards pushed it to 36-26 after one.

Down by nine following a Ryan Arcidiacono three, the Bulls defense continued to struggle to stop the ball as consecutive buckets from Shabazz Napier made things a 43-29 game. Now down 17, Coby White looked to add to his strong finish to the first quarter by controlling the tempo of the offense to get to the free-throw line. Add in another three-pointer from him, and Lavine and the Bulls were climbing back into things down 48-39.

With the Wizards pushing the lead back to 11 at 50-39, Lavine and Satoransky scored the next six points to close the gap to five before another Lavine three made things a four-point game. Bradley Beal and Rui Hachimura closed out the second quarter with strong play as they weathered the Lavine storm in the second to lead 69-62 at the half.

Offensively speaking, the Bulls were good in the first half, but it was their defense that was not at the level they have played much of the season. That trend continued into the third as four different players scored buckets for Washington as part of a quarter opening 9-2 run to push the lead back to 78-64. Nearly three minutes in was when Satoransky tried ending that run, but once again, the hot shooting of Washington remained Mahinmi was gashing the Bulls defense inside to build a 94-73 lead before leading 100-82 after three.

In full desperation mode entering the fourth, everyone on the planet knew who the Bulls would lean on if they wanted any chance at a comeback. It was the bench getting some momentum for the Bulls early with White and Shaq Harrison getting a pair of easy buckets to start the fourth. Harrison added another layup shortly after before Kornet found the rack with a nice dunk on the Bulls' next possession bringing the game to 103-90.

That is when Lavine began to take over as he scored the team's next eight points to put Chicago back in striking distance at 105-98. A pair of Beal buckets mixed with Hachimura free throws pushed the lead back to 11 before Young ended the Lavine team scoring binge with a hook shot. Washington continued to gash the Bulls defense, but Lavine did his best to keep things close, scoring eight straight points for the second time in the quarter to bring things within 114-108.

That would be as close as the Bulls would get, however, as Washington used a quick 6-0 run to put the game out of reach before icing things at the free-throw line late 126-114. Lavine led all scorers on the night with 41 as 19 of those points came in the fourth. Satoransky chipped in with his best game in a while, adding 19 points while White put in 14 off the bench.

It's no surprise to see Beal continue to lead the Wizards as he dropped 30, but it was the balanced Washington office that was the difference here. In total, the Wizards had four starters and seven total players in double figures with Hachimura (20), Napier (15), Mahinmi (15), Moritz Wagner (12), Smith (10) and Davis Bertans (10) all with ten plus in the game. Washington shot just under 54% from the field while the Bulls shot 47%. The Bulls did make 16 threes on the night with 41% shooting as that kept them in the game.