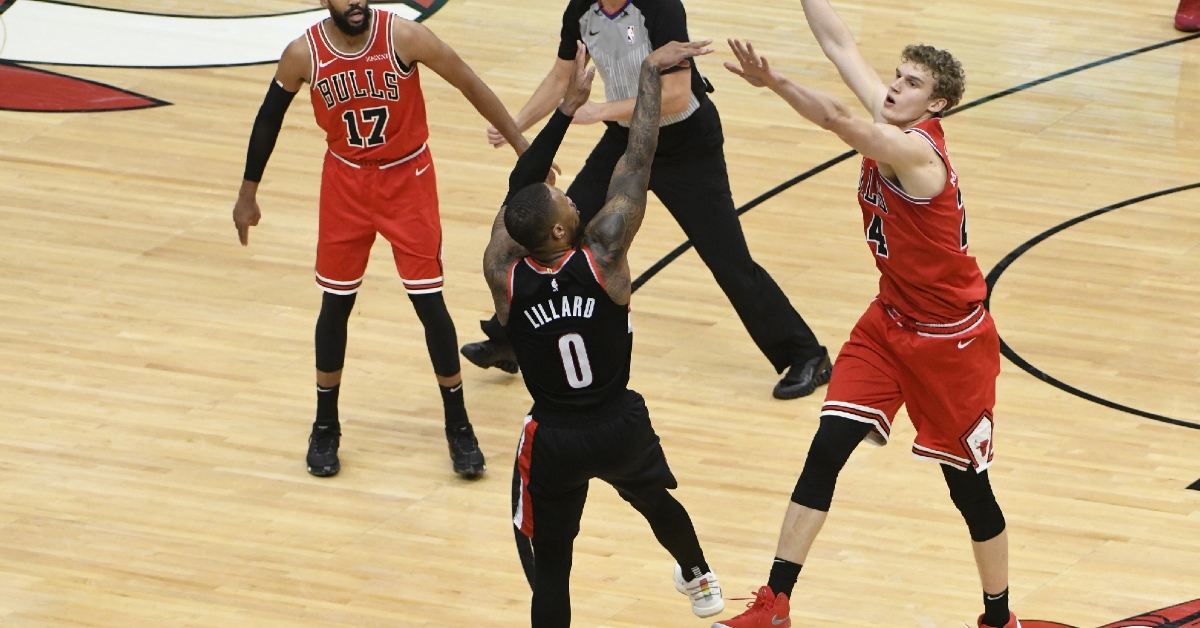 Chicago continues to be a work in progress, but things have gone better this season than in recent years. Saturday night was a classic case of a young team still learning how to win. After falling behind by 17 at one point in the second half, the Bulls rallied to take a five-point lead late in the fourth.

That lead typically would have been enough, but it took 44 points from Damien Lillard, including a pair of clutch threes in the final 30 seconds to down the Bulls 123-122. The second of those three's was an impressive one as Lillard was contested from the start.

Lillard had the hot hand all night for Portland as he came out strong from the start. Chicago was able to weather that storm in the first half as Coby White, Daniel Gafford, and Patrick Williams got the offense going early. Down 7-3 in the early going, Gary Trent Jr and Enes Kanter stepped up, giving the Blazers a 10-9 lead following a 7-3 run.

That lead continued to grow from that point, with Lillard staying red-hot from deep to put the Blazers up five. Lauri Markkanen had an excellent night for the Bulls, leading the team in scoring with 31. In the first quarter, his three closed the gap to two, ahead of another White three to give the team the lead. The Bulls built on their small lead with Thaddeus Young and Garrett Temple getting involved in the action as Chicago held a 34-32 lead after one.

Not only did the Bulls close out the first quarter on a positive note, but they got things started on the right foot to start the second. After not attempting a field goal in the first, Zach Lavine knocked a pair of threes down from deep, and just like that, the Bulls had their largest lead of the night 40-32. Carmelo Anthony put an end to that run with a mid-range jumper, but Otto Porter Jr answered, maintaining the Bulls eight-point lead.

Down by eight midway through the second, and it was time for Trent Jr to take over. Not only did he knock down consecutive threes, but he scored eight of the team's next 10 points, with Rodney Hood grabbing the other two. The second of the Trent threes gave the Blazers the lead before extending it off another Robert Covington three. The three-ball continued to be the game-changer for Portland as they pushed the lead to 14 ahead of White, cutting the lead to 64-53 at the half.

Portland dominated things down the stretch to end the first half, and they continued to put forth that momentum in the third. Kanter used his presence on the inside, but it was Lillard time once again as Portland build their largest lead of the game at 19 points. After a quiet first half, Lavine starting to get going in the third as he teamed up with Markkanen to bring things within 12.

Still down 18 after more Lillard and Trent buckets, Williams showed his range from deep ahead of the bench mob, getting going once again. With the help of Lavine and Markkanen, mixed with bench contributions from Young and Tomas Satoransky, Chicago closed the deficit to single digits as they trailed 93-86 after three.

With the game still within reach, Markkanen kept his hot shooting effort going starting the fourth off with a three to close the gap to four. Portland answered with threes from Henry Giles and Anferee Simons, but the Bulls were not going to let things get out of closing the gap to two after the Temple three.

Chicago continued to exchange buckets and keep things close until Satoransky came up with his biggest bucket of the season to give Chicago a two-point lead. Lavine added to that, putting Chicago up four, but it was Lillard stealing the show in the fourth with his long-range shot attempts from deep. Now down four after some offensive sets for Portland, Temple was left alone for three knocking it down to cut the lead to one.

Markkanen then went to town both outside and inside, scoring the team's next five points to retake the lead. A Lavine layup extended the lead to four, but once again, it was Lillard coming through, closing the gap to two with less than a minute to go. Looking for a clutch shot to ice the game, Lavine took matters into his own hands, burying one from deep to put the Bulls up five with 32 seconds to go.

Covington refused to let his team go down quietly, getting inside the paint to make it a one-possession game as this was going to come down to free-throw shooting. Chicago inched closer to closing things out as White knocked down a pair of free throws to put the Bulls up five with 12 seconds to go.

That was when things changed for this Bulls team. Knowing exactly who the ball would go to, Chicago still couldn't stop him as Lillard connected from near the logo once again to make it a two-point game. Following the inbounds pass on the next play, Lavine was tied up with a pair of players, and a controversial jump ball was called.

All the Bulls needed to do to secure the victory was to come down with the jump ball, but instead, it was Portland winning possession. Lillard got the ball, dribbled around the three-point line, and created just enough space to get the contested shot off over Markkanen. The result was not what the Bulls were hoping for as Lillard sank the buzzer-beating three to knock off the Bulls 123-122 and send them to 7-11 on the season.