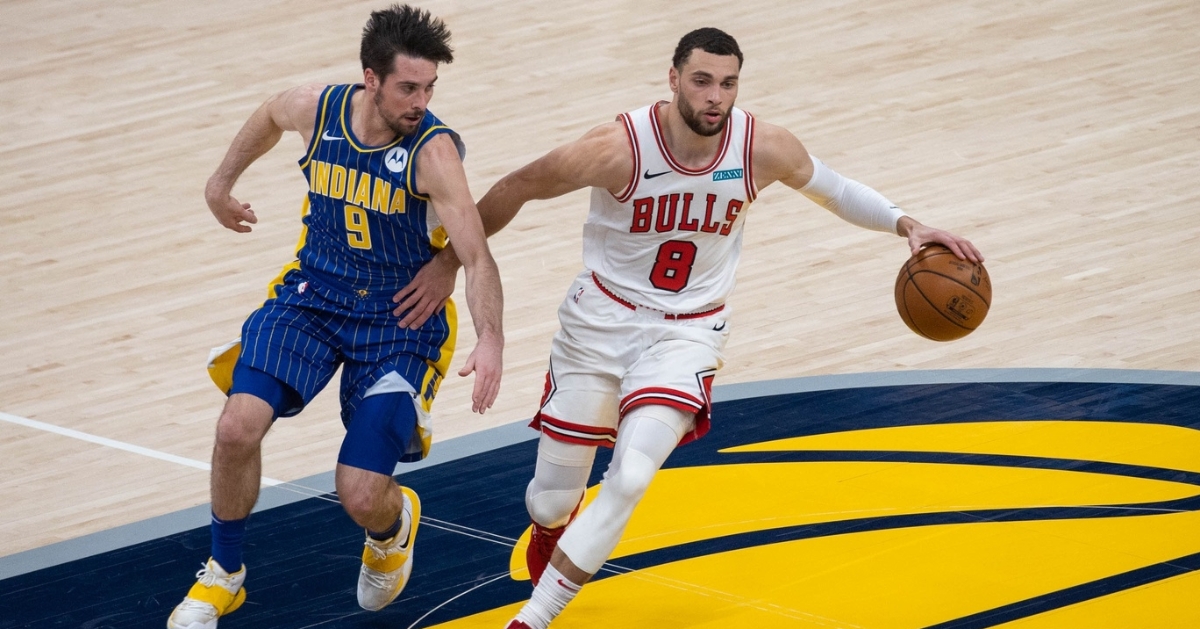 Looking to avenge an early-season loss against Indiana, Chicago traveled to Bankers life Fieldhouse, looking to get back on the winning track. Chicago did get some help before the start of things as Wendell Carter Jr. returned to the lineup after missing the last three weeks.

Although a little rusty, his presence in the starting lineup was huge as Chicago led by nine after three quarters. Indiana was able to play a great final quarter erasing a nine-point deficit to force overtime. Fortunately for the Bulls, they continued to go about their business, outscoring the Pacers 15-7 in the extra frame to pick up a 120-112 win on the road.

After falling behind early on a Malcom Brogdon jumper, Carter Jr got involved early, scoring the team's first four points before a Zach Lavine three made things 7-3. Brogdon answered with a three of his own as he scored five of Indiana's first six. With the typical stars getting involved early, guys like Coby White and Domantus Sabonis started to find their rhythm as the teams were midway through the first.

This was about when the Bulls bench started to get going scoring the final eight points of the quarter for Chicago. Thaddeus Young was responsible for five of those points, with Tomas Satoransky dropping three and the Bulls clung to a 24-21 lead after one. Unlike 90% of their games this season where offense set the tone, it was the defense in the first half leading the way as Chicago was impressive.

Their defense helped them build an eight-point lead early in the second, with Denzel Valentine and Garrett Temple getting involved on the offensive end. T.J. McConnell and Aaron Holiday helped keep things close as they managed to pull Indiana within three before Valentine pushed it back to six with another trifecta.

The rest of the first half saw Lavine get going for the Bulls, with Myles Turner and Brogdon starting to pace the Indiana offense. That led to a constant exchange of buckets before Sabonis helped but the Pacers in front 41-40. From that point on, it was all Chicago as a Patrick Williams three helped spark a 9-3 run to end the half with the Bulls in front 49-44 at the break.

That strong defense continued in the early part of the second half as the Bulls raced out to a 58-47 lead following a 9-3 run. With Lavine heating up from deep and White getting to the line, Chicago took complete control of the game by going on an 18-6 run across the end of the second and the start of the third. Knowing they needed offense in a hurry, Brogdon continued to lead the way for the Pacers, but it was Justin Holiday getting some shots off, closing the gap to seven.

Williams has struggled with his shot lately, but he came up with a couple of clutch shots in the second half to keep the Bulls in front by three possessions. That is when the trio of Sabonis, Brogdon, and Justin Holiday took over as they went on a 9-0 run themselves to tie things up 64-64. A Justin Holiday three extended the run to 12-0, with Indiana now leading 67-64.

Looking to put a stop to the run, Williams got to the line to sink a pair of free throws, but that was just the beginning. Chicago closed out the third quarter on what would be a 15-4 run with White, Satoransky, and Temple each coming up with huge buckets down the stretch. It was Satoransky staying hot as his three with less than two seconds to go kept the Bulls in front 79-70 with one quarter left to play.

Basketball is a game of runs, and the Bulls know all too well that Indiana was far from finished. They just had to make sure they could match whatever the Pacers did. Despite Jeremy Lamb getting going in the fourth, Satoransky stayed hot, matching what Lamb did to hold the nine-point lead. McConnell once again started to find his shot and Edmond Sumner and the Pacers suddenly closed the gap to 86-83.

With more momentum leaning Indiana's way, White did his best to put a stop to things, but it was Lamb and Turner answering with five of their own to tie things up 88-88.

Coby White did a little bit of everything in Indiana, putting up 19/8/7 and making some BIG plays down the stretch. pic.twitter.com/aRsCF9ehcQ

Tied at 90, the Bulls were in a familiar place as it was time for Lavine to get going, scoring the team's next six points. Unfortunately, Indiana had answers for those points as they held a 97-96 lead before a Temple three put the Bulls back in front by a pair.

Down a pair late in the game, Lavine continued to work magic with the ball in his hands, hitting on deep three to give the Bulls a one-point lead. With a chance to ice the game late, Lavine split a pair of free throws on the other end, giving the Pacers a chance to tie it with a two or win it with a three. Indiana elected to give the ball to their closer, putting the ball in Brogdon's hand, who tied things up with 10 seconds to go 105-105. Lavine had a chance to end it in regulation, but his mid-range attempt wouldn't fall as we were headed to overtime.

Overtime win for the good guys!

It wasn't the usual players providing the early offense in the extra frame, with Temple and Valentine giving the Bulls a five-point lead. Following a McConnell bucket, Young tipped in a missed shot to push the lead back to five, and Chicago never looked back, outscoring Indiana 15-7 in the final frame to pick up a much-needed 120-112 road win.

The win moves the Bulls to 11-15 on the season, but more importantly, they are now third in the Central division and continue to fight for the final playoff spot. Lavine led all scorers on the night with another 30-point performance as White and Temple chipped in with 19 and 16 apiece. Despite a slow start, Sabonis led the Pacers with 25 points, with Brogdon adding 23 of his own.