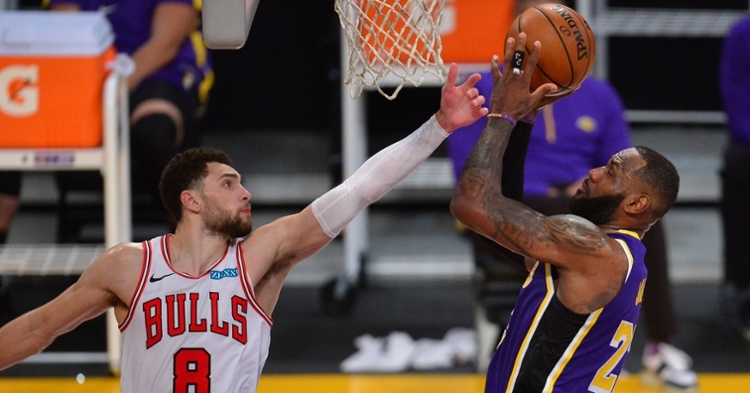 The Bulls have been playing exceptionally well as of late, but they still sat at 4-5 heading into Saturday's game.

This weekend the Bulls will see what they are made of as they took on the defending champion Los Angeles Lakers, followed by the Los Angeles Clippers on Sunday. Zach Lavine had another tremendous game, dropping a game-high 38 with half of those coming in the first quarter. In the end, Lebron James was able to make some tough shots down the stretch, and the Lakers held off Chicago 117-115.

Early in the first, both teams were feeling each other out, but Wendell Carter JR set the tone for the Bulls. Carter had a big night himself dropping 23 points in the loss. Otto Porter Jr got in on the scoring action before Lavine started to take over the stretch. For both sides, it was all about balance as neither Lavine nor James was the stars early. Patrick Williams was in on the fun, with Marc Gasol, Wesley Matthews, and Markieff Morris all tallied points in the early part of the first.

19 years old holding his own vs. LeBron.

With the score tied 18-18 following a Lavine bucket, the Bulls managed to take a four-point lead, with Lavine scoring 10 of the next 12 mixed in with a Thaddeus Young bucket. Now down 29-23, the Lakers were looking for instant offense to close out the first, and that came in the form of Montrezl Harrell and Talen Horton-Tucker, but it was the Bulls standing their ground and holding a 33-28 lead after one.

Chicago continued their strong early play in the second, with Coby White scoring the team's first 10 of the quarter and helping propel the Bulls to a 43-33 lead. That was the largest lead of the night for Chicago as James and Co. began to find their groove. With James now starting to take over the game in the paint, guys like Horton-Tucker and Alex Caruso were left open behind the arc as they began to hit those shots to close within three.

Like they have done a lot this season, the Bulls managed to withstand whatever the Lakers threw at them, with Young and the bench providing an excellent lift. Denzel Valentine continued to impress, especially from deep as his three put the Bulls back up five. The rest of the quarter was mostly a mix of exchanging buckets, but Dennis Schroder's lay ahead of the Kyle Kuzma three with seconds left gave Los Angeles a 59-58 halftime lead.

Win or lose, and the Lakers had to be impressed with this Bulls team as they proved they could play with the champs. Granted, Anthony Davis was unavailable in this one, but keep in mind the Bulls are also missing four players due to COVID. Add in Porter Jr leaving during the game with back spasms, and the Bulls continue to fight shorthanded.

Chicago came out the gates on fire to start the second half with Carter Jr and Garrett Temple scoring the first seven points of the half to give the Bulls a six-point lead. Morris, James, and Schroder helped the Lakers battle back, but a Lavine three kept the Bulls in front by four. Matthews answered on the other end with a three of his right before Carter Jr went at it on the inside once again. With Carter Jr patrolling the inside, it opened lanes for Lavine to attack, and the Bulls were pushing the tempo leading 77-71.

Following a couple of Gasol free throws, James too made a pair before Matthews showed off his range knocking down two threes to cap off a 10-0 run, which was stretched to 12-0. Matthews hit another three a few minutes later to push the Lakers lead to seven, which at that time was their biggest lead of the night. Chicago had an Adam Mokoka sighting last night as he got into the action in the third, helping the Bulls close within 92-88 after three.

Unlike the last few games, the Bulls came out flat in the fourth as Caruso and Harrell opened the quarter up on a 7-2 run to push the lead to 99-90. Now down 12 and in danger of letting this get out of hand, Valentine put an end to the run before Carter Jr added to his already big game. Young closed the gap a bit further before Schroder and Lavine exchanged threes to keep the game 104-100.

Zach LaVine dropped 38 points in 38 minutes vs. the Lakers.

Whenever it looked like the Lakers were about to push things out, Chicago had an answer with the Lavine Carter Jr duo taking over. They kept things close, but once Morris stepped out to knock down a three, you could see the momentum fully on the Lakers shoulders. Not ready to let this one get away, Lavine continued to attack the rim and brought things within 110-107.

That was before Schroder knocked a huge three down the stretch to put the Bulls down by six. With less than two minutes to go, Temple hit a clutch three to bring the deficit to four before Young got inside, cutting things to 114-112. With the game on the line, who else would the Lakers turn to other than James.

These are the moments he lives for, and James rose to the occasion, slashing right to the bucket to push the lead back to 116-112. All the Lakers needed to do was make a stop, and the game was theirs, but Temple had other plans connecting on his second three of the quarter to make things 116-115 with under 40 seconds to go.

Looking to ice the game once more, James could not connect on his three giving the Bulls a chance to take the lead. It was now time for their closer in Lavine to take his shot, and despite a decent look inside the three-point line, Lavine couldn't knock it down as the Bulls were forced to foul Schroder. After making the first, Schroder missed the second attempt, but the Lakers' offensive rebound allowed them to run out the clock, with the Bulls missing a golden opportunity 117-115.

LeBron James was asked what his thoughts are on Chicago Bulls rookie Patrick Williams.

LeBron’s answer is a must watch for Bulls fans.