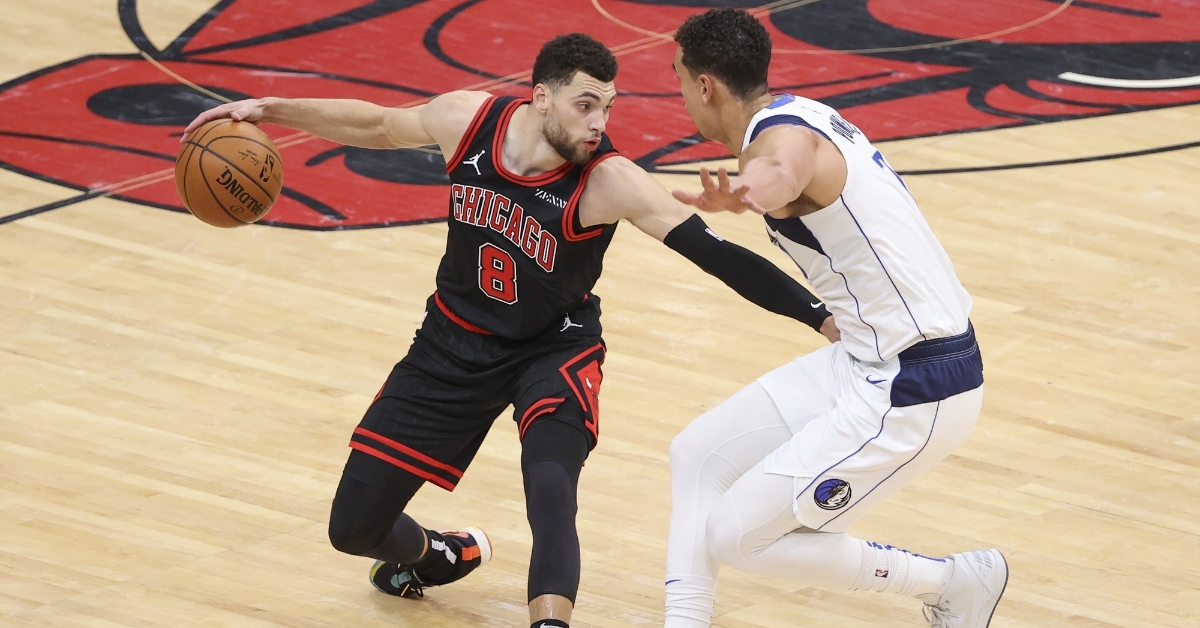 It took a little more than a week, but the Bulls were finally able to win a game at the United Center this season. Facing off against a Dallas squad without MVP candidate Luka Doncic, Zach Lavine took it upon himself to show why he is considered one of the NBA's premier talents. Anchored behind his 21-point first quarter, Lavine finished the night with 39 as the Bulls picked up their first home win of the season 118-108 to move to 3-4 on the year.

If you have watched the Bulls at all this season, you will notice a few things. You will see that this team is a work in progress and has yet to play a game with a fully healthy roster. You notice the fight this team has, as they have never given up in a game. Finally, and most importantly, this team is young, and they are so much fun to watch.

Last night fans got a chance to see how fun the Bulls can be with Lavine coming out the gates on fire. Not only did he have 21 of the teams 31 first-quarter points, but had Wendell Carter Jr not scored in the first few minutes, Lavine would have had every point for his team in the early going. With Lavine leading the way for Chicago, Dallas got a strong effort from Jaylen Brunson, who was filling in for the injured Doncic.

Brunson not only had a career night from the field but teamed up with Tim Hardaway Jr and Willie Cauley-Stein to give the Mavericks some much-needed offense in the first. Despite that first-quarter burst from Lavine, the Mavericks were able to match Chicago's scoring, and the first quarter ended with a 31-31 tie.

The second quarter was a much different story for Lavine as there was no way he would be able to keep up that scoring pace. He did add eight more points in the second, but the rest of the team needed to pick up the slack. This was when bench players Thaddeus Young and Denzel Valentine started to find their rhythm, as did rookie Patrick Williams as they provided the early offense for the Bulls.

Much like in the first quarter for Dallas, both Hardaway Jr. and Brunson continued their excellent starts to the game, but others were now getting involved. Boban Marjanovic used his size on the inside; Maxi Kleber was stretching the floor with his outside shot. Chicago also saw some substantial contributions from Otto Porter Jr and Daniel Gafford in the second as the Bulls went into the half down 60-59.

Chicago's early-season theme has been trailing at the half, but unlike the early games when the Bulls lost, Chicago wasn't about to let this one getaway. After a slow start to the game that saw Coby White score just five first-half points, he got going in the third. White scored 18 second-half points to finish second on the team with 23 points in the game. A big reason for that was his outside shooting, which started to get going in the third.

Unfortunately, whatever the Bulls were able to do offensively early on, Dallas matched with Hardaway, Brunson, and now Josh Richardson and Dorian Finney-Smith getting in on the action. Down by four midway through the fourth, Lavine started to get hot again as he teamed up with White to put the Bulls back in front for good. The Bulls bench continued to contribute down the stretch, with Gafford and Valentine scoring the final seven points for

Chicago, giving them an 86-81 lead after three.

Hoping to close things out in the fourth for their first home win, the Bulls would have to make that happen without Lavine's offense as he was held to just two points in the final period. Fortunately for them, White continued to lead the second half and knocked down three fourth-quarter triples. With Trey Burke, Hardaway Jr, and Brunson doing their best to keep things close, Chicago continued to respond with Garrett Temple even getting in on the action putting the Bulls up nine with his triple.

Cauley-Stein and Richardson continued to battle for Dallas, and with the help of Kleber, the Mavericks continued to keep things within striking distance. Fortunately for Chicago, the trio of Porter, White, and Lavine took care of things down the stretch to give the Bulls their third win in their last four games, 118-108, moving to 3-4 on the season.

Chicago will be back on the floor Tuesday night as they begin their west coast swing at Portland.