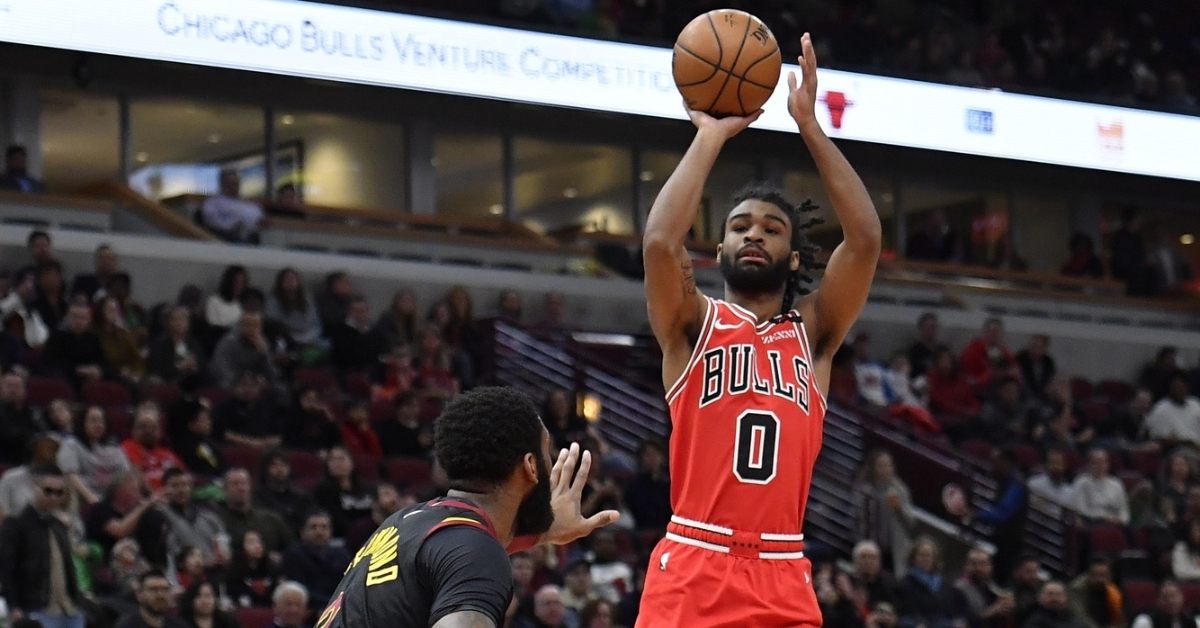 CHICAGO – It was the beginning of a new era in Chicago Monday night as rookie Coby White was in the starting lineup for the first time. After what seemed like a long process, maybe too long if you ask the fans based on the play White has delivered over the second month has proven to be a success as he dropped a team-high 20 points in the Bulls 108-103 win over the Cleveland Cavaliers.

The move to the starting lineup for White moves Tomas Satoransky to the bench with Otto Porter Jr as the team awaits the return of Zach Lavine hopefully in the next week or so. Once that happens, the Bulls will be the healthiest, they have been all season, and it could be at that point where we could see what this team looks like with their best lineup on the floor.

In place of Lavine and Porter in the starting lineup has been Shaq Harrison and Denzel Valentine both who have stepped up their game and scored the first two buckets for Chicago last night. Cleveland, however, was unfazed by the new-look lineup as stellar second-year player Collin Sexton and Cedi Osman had the Cavs offense rolling early before White drained a three to tie things up at 9-9 in the first.

Still searching for their games since returning from injuries have been Wendell Carter JR and Lauri Markkanen as the two of them used their size on the inside early. That mixed with the outside shooting of Valentine and Porter gave the Bulls a nice inside out combination, but they still trailed by two after one-quarter of play.

It was the Carter JR show to open the second quarter as he scored the Bulls first six points while the Cavs had six points as a team through the first couple of minutes. Now tied up at 35 following a White bucket, Valentine took it upon himself to pour in four quick ones as the Bulls had their first lead of the night by four. Cleveland countered with the Sexton running the offense and finding shooters like Kevin Love, but Chicago withstood the punches and continued to battle hard as they took a two-point lead 54-52 into the break.

Much like the Bulls had success going inside to start the second, Cleveland did the same to open the third as Andre Drummond was a man on a mission early putting the Cavs up three. While the inside game was working for Cleveland, the outside game was starting to open for Chicago as Valentine and Markkanen connected from deep three times, before Satoransky and Porter got buckets on the inside to help the Bulls retake the lead.

Now up four points, White gave the Bulls their biggest lead of the night as his step-back three put them up seven with just two minutes to go in the third. Unfortunately for Chicago, Alonzo McKinnie, Drummond, and Larry Nance Jr closed out the quarter in a big way as those three were responsible for all nine of the Cavs points in the 9-2 to close out the third tying the game up 78-78.

Hoping to avoid dropping another disappointing contest at home, Thaddeus Young was the offense early on as he was battling it out with Sexton to open the quarter. Coming off a huge fourth on Sunday in Brooklyn, Porter Jr was going to be counted on once again, and he answered the bell by making several clutch shots down the stretch. Perhaps the most promising part of the fourth quarter was seeing other players step up when needed.

It wasn’t the usual Porter, White, or Lavine shows that we have been accustomed to seeing. Instead, guys like Valentine, Satoransky, and Carter Jr. all played prominent roles down the stretch for the Bulls as their limited depth was showing they can deliver when called upon.

The problem was Cleveland had a hot shooting Sexton, who also was getting production from Matthew Dellavedova and Love down the stretch as Cleveland was hanging around 103-101. Following a pair of free throws from Carter JR, Drummond made a tip shot to keep things a one-possession game, but that was as close as Cleveland would get as Harrison iced things from the line to give the Bulls a 108-103 win.

White continued his hot stretch of play as he remains one of the focal points of the offense, dropping a team-high 20 points in the win to go with 5 Reb and 5 Ast. His nine turnovers is something that will need to improve going forward. Carter Jr. had his best game since returning chipping in with 17 pts while Markkanen, Porter Jr, and Valentine all added 15 each for the Bulls. Sexton led all scorers on the night with 26, while Drummond added 21 in the loss.

Clinched the W against the Cavs ??

Here’s a look at last night, presented by @LiquiMolyUSA: pic.twitter.com/DJ4KXV4QnL