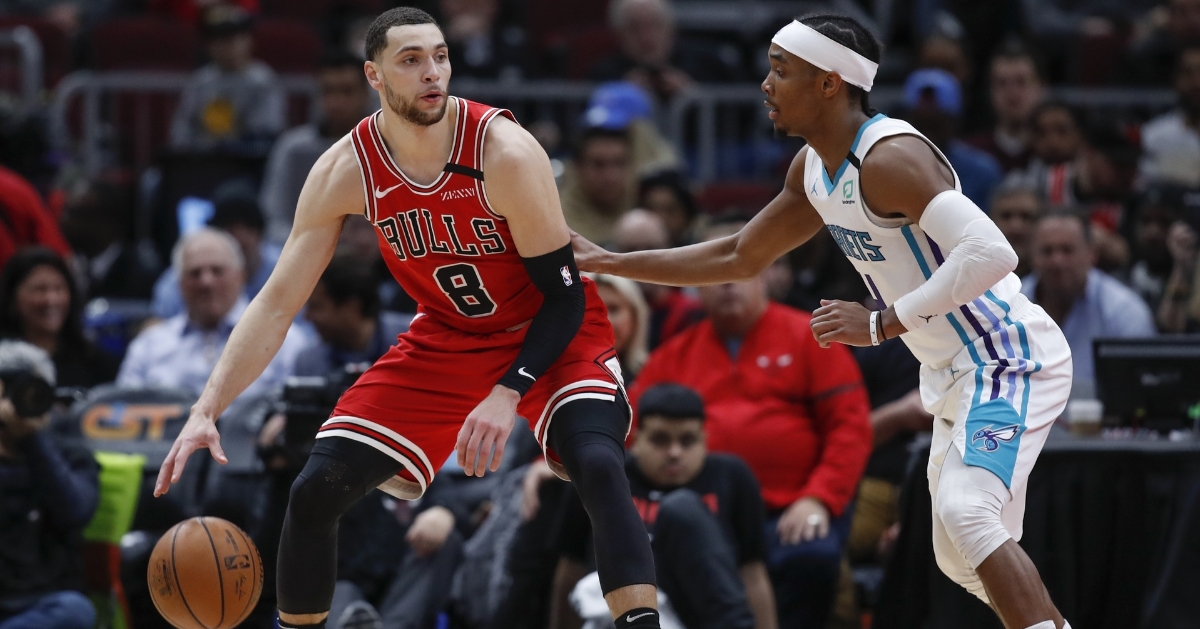 The month of February hasn't been too kind for the Bulls as you could even say it has been a nightmare. Not only do the injuries continue to pile up, but the Bulls have gone winless in February and came into Thursday night looking to put an end to that against the Hornets. Instead, we continued to see a team fall behind early and just look as if they have given up this season as the Charlotte Hornets handed the Bulls (19-37) a seventh consecutive loss 103-93 as Chicago remains winless in February.

With Chandler Hutchison added to the inactive list before the game, the Bulls would have just nine players available on the game but did get Daniel Gafford back. Knowing they would need to play smart with what they had, the Bulls found themselves down 7-2 early as P.J Washington had his way with five quick points in the first. Two quick buckets from Tomas Satoransky and Zach Lavine tied things up 7-7 before Cody Zeller put the Hornets back up four 13-9.

Charlotte continued to build on their early lead as Washington continued to have a big quarter with Malik Monk getting going to push the lead out to 24-15. Down double digits, it was the Bulls bench in Shaq Harrison, Coby White, and Christian Felicio that scored the team's final three buckets in the quarter, but it was no match for the Hornets as they led comfortably 33-20 after one.

Playing from behind is no secret to the Bulls as they have had to do that a lot lately. The only problem is playing from behind down double-digits after one is that much harder because you need to play perfectly to come back nearly. With Monk now controlling the offense, Miles Bridges started to find the inside at will as the Hornets maintained their double-digit lead early on. It was the Harrison and Thaddeus Young show in the early stages of the second as they contributed to the team's first eight points in the quarter as the Bulls bench scored most of the points, but still trailed 60-44 at the half.

It was in the third when things got interesting as the Bulls came out of the locker room with a different mindset. Down 20 following a pair of Washington buckets, Lavine picked up five quick points, including knocking down the Bulls first triple of the night. It was after that shot when things seemed to click offensively as the Bulls would knock four threes in the next few minutes, two from Young, one from Satoransky and one from Ryan Arcidiacono to go on a 17-2 run closing the gap to 70-68 Charlotte. Young had eight points in the quarter en route to a game-high 22.

Chicago continued to keep things at a one-possession game for a majority of the final five minutes as Luke Kornet would hit the Bulls sixth three of the quarter, closing the gap to 74-71. Charlotte picked up five points in the final two minutes to at least push the lead to two possessions once more leading 79-73 after three.

Now with new life, Chicago was hoping their third-quarter surge would carry over to the fourth as they looked to complete the comeback effort. The Hornets wasted no time scoring the first four points curtesy of Bridges and Zeller to once again put the Bulls down by double digits. Harrison answered that as his big night continued, which was followed by a thunderous Gafford dunk, and once again, we had a six-point game.

Whenever it looked as if the Bulls had momentum on their side, Charlotte would answer as they continued to lean on Washington with Rozier getting involved to push the lead back to double digits. Lavine and company continued to show heart, but as soon as things got close, Charlotte stretched it back out as that theme continued the rest of the quarter. Chicago did get things to six points late in the fourth after a White layup, but only managed two points in the final 90 seconds as the Hornets took care of business 103-93. The Bulls will be back in action Saturday against the Phoenix Suns before also playing Sunday against Washington.

Young led the way for the Bulls finishing with a team and season-high 22 points to go with 11 boards in a double-double effort. Lavine and Satoransky added 19 and 12 points each, while White and Harrison chipped in with 12 and 13 respectively off the bench. The Hornets were led by Monk, who came off the bench to lead all scorers with 25. Bridges added 22 points to lead the starters with Washington (17), Zeller (16), and Rozier (14), adding double-figure efforts.