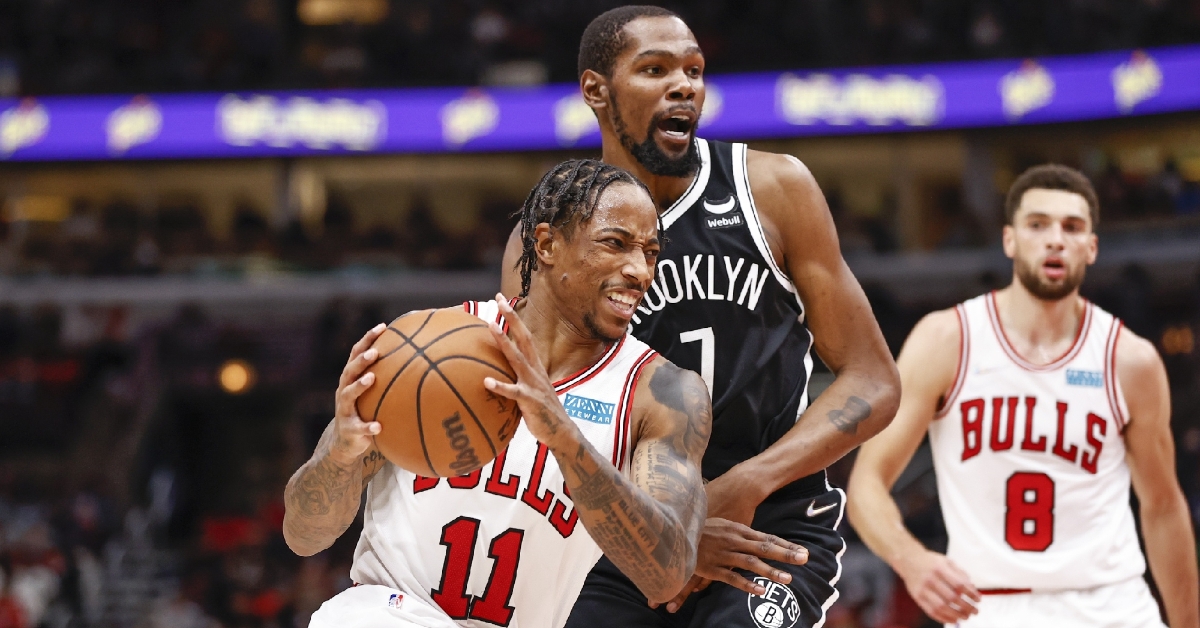 The Bulls got a nice win against Durant and Co. (Kamil Krzaczynski - USA Today Sports)

CHICAGO – For the Chicago Bulls (7-3), the first 10 games have gone about as good as they could have hoped for. They are not only leading their division at this point, but continue to have one of the best records in the Eastern Conference. Take away a pair of losses to the East-leading Sixers, and things would look even better.

Losses aside, the Bulls are in the middle of a very tough stretch which they knew about when the schedule was released. That means they can't hang their heads on one loss as they have to get up and focus on the next game. If Chicago thought Philadelphia was tough, then the Brooklyn Nets (7-4) winners of five straight would be an entirely different test as they were coming to the United Center full of confidence.

Even without all-star Point Guard Kyrie Irving, who is not allowed to play until he is vaccinated, the Nets still have plenty of firepower, which falls on the shoulders of Kevin Durant. Often regarded as one of the two best players in the game, Durant may be the best pure scorer in the league and put that on display last night with a game-high 38 points. Add in James Harden, who the bulls did a great job holding him to 14 points, and the Nets have three of the best scorers in the game when all are playing.

However, the list of talented players is much longer than that, with guys like Joe Harris and Dayron Sharpe filling in nicely. Add in Blake Griffin, Paul Millsap, and LaMarcus Aldridge, and you could turn back the clock to the all-decade team from 2005-2015, as those are some of the most dominating names of that time. The Bulls knew they would have their hands full and early on did a great job leading by eight after one-quarter of play.

A big reason for that is the continued great play of the Zach Lavine and DeMar DeRozan duo as they led the way once again. DeRozan continued to be an offensive force dropping a team-high 28, while Lavine went about his business quietly, adding 24 points with five rebounds and five assists. Take those two away, and this team would struggle to score points, although all five starters finished with double figures as Javonte Green, Lonzo Ball, and Nikola Vucevic all had 11 points.

Even with the increased production across the board, the Bulls still found themselves trailing after three quarters by two points as the Nets used a 30-16 second quarter to grab the lead at the half. Once the fourth quarter was underway, you saw a completely different Bulls team who looked to feast on a Nets team playing in their second game of a back-to-back.

While bench scoring has been an issue for the Bulls this season, that wasn't the case last night as the Chicago bench dropped 33 points in the game, with a lot of that production coming in the fourth quarter. In fact, the Bulls bench outscored the Nets 18-17 on their own in the fourth quarter as they keyed a huge run. Derrick Jones Jr and Alex Caruso may get the most attention off the bench, but it was the hometown Kid Ayo Dusunmo showing up in a big way.

The second-round pick is starting to create an excellent role for himself as Billy Donovan loves his makeup. Not only is he a better shooter than what people give him credit for, but he is one of the best defenders on the team and plays with confidence that you can't coach. That confidence was on full display last night as he scored a career-high 15 points off the bench, helping the Bulls outscore the Nets 42-17 in the fourth quarter to pick up the 118-95 win.

A lot was made about the Bulls start to the season and the teams they faced. Across the first four games, Chicago saw three of the worst teams in the league and made quick work against them. Once the schedule got more challenging, people wanted to see how they could hang against some of the best teams in the league.

With losses to the Knicks and Sixers x2, the jury was still out how good this team is and how good they can be. Even with a home win against the Jazz, many people still felt the Bulls were a little ways away. Well, those same people may be changing their mind now as Chicago picked up the statement win they have been searching for.

Even without Irving, the Nets are considered an NBA title favorite as they should be. This wasn't just a win for the Bulls. This was a dominating win as they handled the Nets outside that rough second quarter. The fourth quarter especially showed what the Bulls are capable of even against great teams. They have an offense that can score points at will, their defense can shut opponents down, and they have a ton of confidence as a team.

All that goes a long way in determining a team's success during the season. With a critical west coast swing coming up in the near future, fans will see what this team is made of coming out of that.

Help is on the way

For as good as the Bulls bench was last night, that has been an issue this season as the consistent scoring hasn't been there. Ironically, this was one of their strong points last season, and after losing a lot of the pieces they did this offseason, you knew the bench would be a question.

Chicago did an excellent job bringing in some talented players, but none of them apart from Jones Jr and Caruso have been contributing consistently. Dosunmo is starting too, but let's see him do that more than just once every five games. After Patrick Williams was lost with a wrist injury for the season, the already short Bulls bench got shorter as Green moved from the bench to the starting lineup.

Despite all that, this team is 7-3, and if the season were played in increments of 10 games, the Bulls would be on pace for 56 wins. Still, the Bulls know they need more production from their second unit, and that could be happening soon as help is on the way in the form of Coby White.

After undergoing shoulder surgery this offseason, White knew he would miss time, but wasn't sure how much. Some had him out until February, but most said January. Now, it looks as if he may return ahead of schedule as White has been cleared for full contact. This is the first step for him to get back to the court. Once he does, look for the Bulls to be even better as he provides scoring off the bench that not many have.

The debate of who is the best player on the planet often falls between three names, but Durant is making a case once again. Always put on the same pedestal as Lebron James, Durant may have more offensive talent than anyone in the league today. Not only is he 6-11, but he can do virtually everything on the court.

He can score, he can rebound, he can pass, he can block shots, and most importantly, he can shoot. He is virtually a five-tool NBA player who has no set position, and because of that, he is unguardable. If you put a big guy on him, he can put the ball on the floor and blow past them. Try to go smaller, and he will rise and shoot over you.

As good as James and Giannis are, I would argue that Durant is better for the sole purpose he can take over a game in different ways. There is a reason why he has won an MVP and multiple scoring championships, as there is simply nothing the guy can't do.