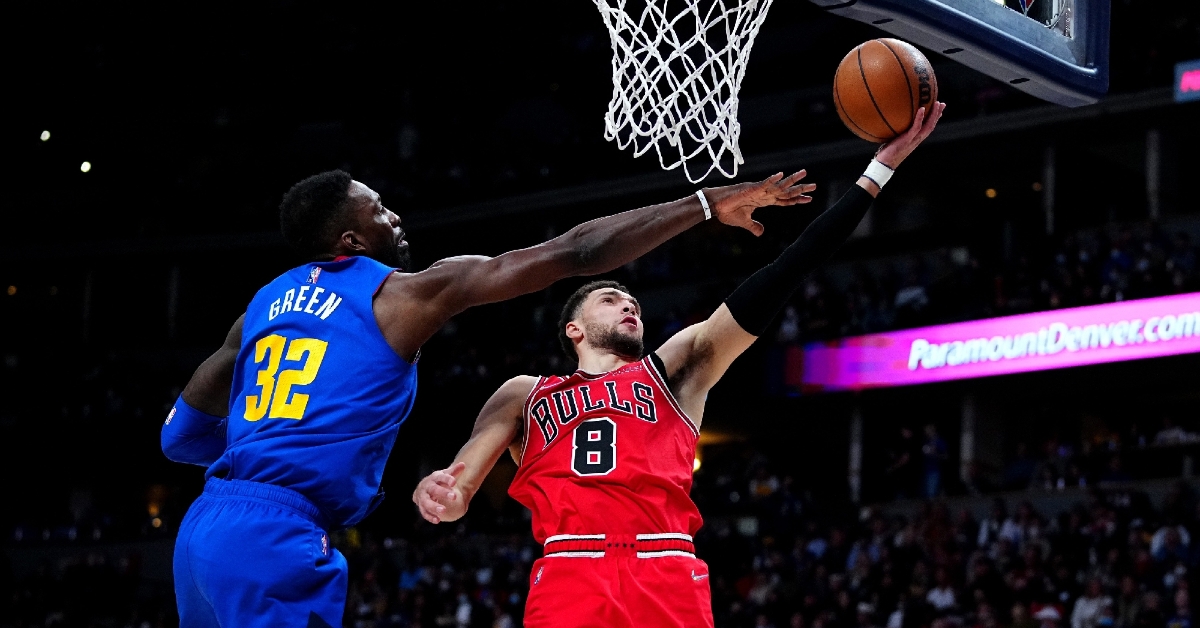 DENVER – Despite being shorthanded for the better part of the last week, the Chicago Bulls (11-5) still had a chance to come away with a winning road trip. The Bulls would have to face one of the league's best teams at home in the Denver Nuggets (7-3). Playing shorthanded themselves, the Bulls dodged a massive bullet as defending league MVP Nikola Jokic was out of the lineup with a wrist injury.

Not only is Denver a great team at home, but playing in Denver has been a house of horrors for a long time as the Bulls have suffered some interesting losses at their place. This has also been a series dominated by the Nuggets, who entered the game riding a 12-game winning streak against the Bulls. Throughout the first quarter, it looked like the Bulls were going to be on the short end of the stick as the Nuggets raced out to a big double-digit first-quarter lead.

A big reason for that was the play of Aaron Gordon as he stepped in Jokic's absence to drop a team-high 28 points and looking like the Orlando Magic version of himself. Add in the 23 points from Will Barton and 16 points from Facundo Campazzo off the bench, and the Nuggets had an excellent trio to lean on as their offense was doing a great job in the early going.

After weathering the storm in the first quarter, the Bulls offense not only started to get rolling, but their defense did as well, especially during the third quarter. Zach Lavine capped off an incredible road trip going 14-24 from the field and dropping a game-high 36 points. His counterpart DeMar DeRozan continues to play at an all-star level himself as he dropped 26 points despite a 7-21 night from the field. DeRozan went 12-12 from the free-throw line to help his cause.

Clinging to a one-point lead at the break, it was the Bulls who came out strong in the second half flipping the game on both sides of the ball. Tony Bradley Jr had his best game as a starter with eight points and five rebounds, while Lonzo Ball (7) and Alex Caruso (4) rounded out the scoring for the starting lineup. One thing that has picked up in recent weeks for the Bulls has been their bench scoring as they continue to contribute down the line.

Coby White scored his first two points of the season with Javonte Green adding five points, including a clutch three in the second half, but it was the Ayo Dosunmu and Derrick Jones Jr combo that seemed to flip the switch. The rookie Dosunmu has been one of the better rookies when it comes to shooting the basketball as he was at it again with 10 points.

Jones Jr, on the other hand, has started to see more minutes on the court, and after dropping a season-high 16 points on Friday, those minutes should continue to increase. Denver didn't make things easy on Chicago as they erased a 10-point lead after three quarters to pull within one possession in the fourth, but they seemed to run out of gas over the final few minutes as the Bulls picked up the 114-108 win to head back home with a winning trip.

A rare win in Denver

Not only did the Bulls top the Nuggets for the first time in 12 tries, but it was also the team's first win in Denver since 2006. That was the longest streak in the NBA for teams at a specific venue, and it is hard to believe that streak lasted that long when you think of it.

You look at some of the Bulls' teams during that time, especially when Derrick Rose was running things, and they still couldn't find ways to win at the Mile High City. There is a reason why the Nuggets are one of the best teams in the league at home, and the Bulls have found that out first hand securing their first win at Denver since 2006.

This is just another milestone that this team has reached in the early season as they continue to impress from week to the next. Expect a lot more of these types of milestones to be reached throughout the remainder of the season.

LaVine in the clutch

LaVine has had another great season, and no one will argue that, but he has taken a back seat to DeRozan thus far this season. That duo is the NBA's leading duo in terms of points per game, and they will continue to make the Bulls offense tick. Friday was the LaVine show as he played at the MVP level he expects from himself.

LaVine has been outstanding on this road trip, but Friday night saw him reach a new level, especially in the fourth quarter. After the Bulls stormed in front to build a double-digit lead, the Nuggets started to mount a comeback as they were not going to go away quietly. That is when Lavine went into attack mode, as he wouldn't let his team blow this lead.

During the fourth quarter, he put the team on his back, making plenty of three-pointers and making the most challenging shots look easy. If the NBA world has learned anything about Lavine these last two seasons, it would be that he is not only an elite scorer, but someone who makes even the most difficult shots look easy.

Zach LaVine was ON FIRE in Denver.

Not only are the Bulls heading home on a positive note, but they completed their brutal west-coast swing with a 3-2 mark. Had they been able to hang on against Portland when they had them down by 15 points at one point in the second half, the Bulls would have gone 4-1 on this trip.

Still, 3-2 on a west coast swing is never an easy task and something the Bulls will gladly take any time they head out west. Keep in mind they did this without Nikola Vucevic, who was in the NBA Health and Safety protocols, and the quality of teams they were facing, and it makes this trip that much more impressive.

This team is for real, and there is not a single person around that can tell you differently. People felt that this 16-game stretch would make or break the Bulls season, and hear they are sitting at 8-4 through the first 12 games of this stretch. The Bulls are not only playing playoff-caliber basketball but beating playoff teams as they continue to show what they are made of.