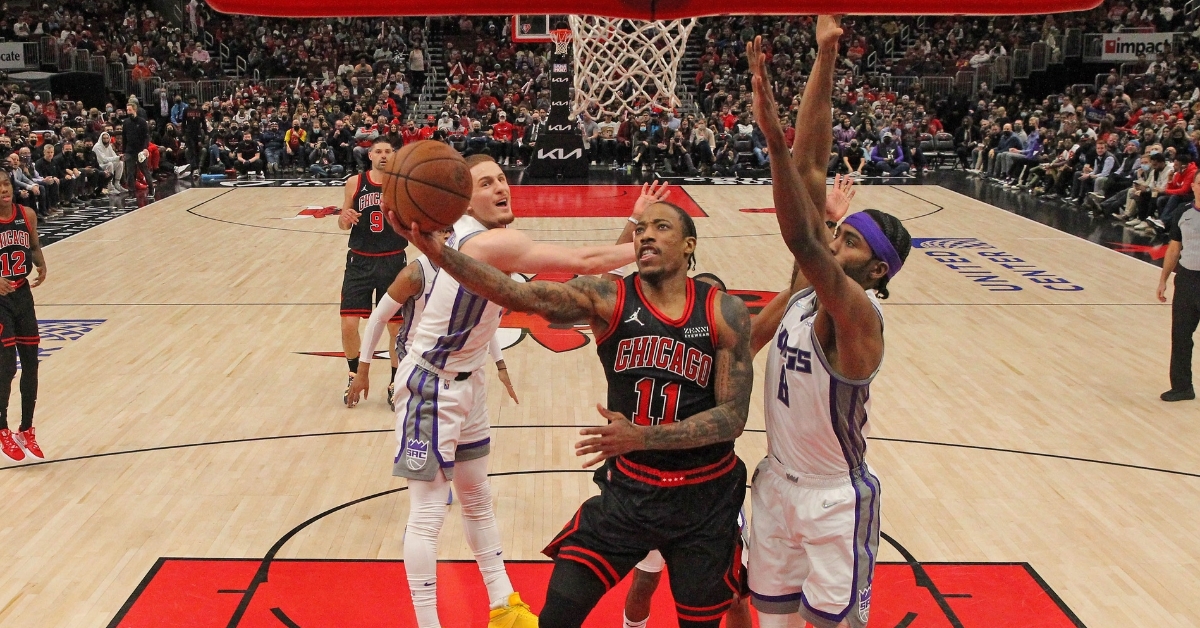 CHICAGO – It is starting to become a broken record at this point in the season as the Chicago Bulls (38-21) have been led by a surprising start this season. Looking to reach their high water mark heading into the all-star break, the Bulls welcomed in the new-look Sacramento Kings (22-38), which has been stuck in neutral for quite a while.

With a chance at NBA history on the line, DeMar DeRozan continued to do his thing once again, leading the way with 38 points. Not only did he score 35 or more for the eighth consecutive game, but he did so, shooting 16-27 from the field. That makes it eight straight games of shooting at least 50% and scoring that many points passing Wilt Chamberlin for the longest such streak in NBA history.

The Bulls would need every bit of his 38 points, as the Kings were more than up for the challenge. Sacramento managed to keep things close all game long, trailing by three at the end of the first quarter and by just six at the break. Once the second half began, the Kings came out with more energy as Domantas Sabonis, who registered his ninth straight double-double against the Bulls; the Kings were able to briefly take the lead in the third before trailing by two after three.

Looking to put the Kings away in the fourth, Chicago had their moments, but never could get on one of their signature runs to put things away. However, when the Bulls needed a bucket the most, they called upon DeRozan and the suddenly scorching Coby White to finish the job as the Bulls took down the Kings 125-118 to move back into first place in the Eastern Conference.

Getting back to DeRozan for a minute. This feel-good story is no longer a story and more so a statement. He is not only having the best year of his career by a mile, but needs and deserves to be in the MVP conversation. Even without Zach Lavine nursing a minor knee injury and everyone knowing where the offense will come from DeRozan continues to go about his business playing 41 minutes and dropping those 38 points in the win.

DeRozan wasn't alone when it came to having a big night as White continued to play the best basketball of his career. One of the hottest shooters in recent weeks, especially from distance White knocked down six more triples to go with 31 points to help DeRozan on the offensive side. Another player who has stepped up his game has been Nikola Vucevic.

Over his last 15 games, the big man has averaged 23.4 PPG to go with 13.7 RPG. Those are great numbers and all-star worthy numbers had he been playing at that level all season. He continued that strong stretch of play with a 21 point, 10 rebound outing on Wednesday to pad to his team-leading double-double statistic. The Bulls also saw Javonte Green (15) and Ayo Dosunmu (12) land in double figures as their starting five continues to be an issue of a lot of teams.

For the Kings, it was a familiar face tormenting the Bulls in Sabonis. After spending the last several seasons with the Pacers and having countless big games against Chicago, Sabonis picked up where he left off with his new team. His 22 points were second on the team, but his 12 rebounds gives him nine consecutive double-doubles against Chicago as the Bulls bring out the best in him.

As expected, the Kings were led offensively by Deaaron Fox, who continues to be one of the more underrated guards in this league. Not only did he drop 33 points, but he added nine assists and six rebounds for a near double-double and put himself in line for a triple-double.

Outside of those two, the Kings had plenty of scoring options, but none that matched the level of Fox. Another new arrival in Justin Holiday can only

play road games with his new team and played well, adding 18 points in the loss. Harrison Barnes is the savvy veteran on this team and continues to be the leader the Kings need as he put down a quiet 17 point effort in the loss.

Unlike the Bulls bench that gave the team minimal production, Sacramento had more success, with most of their success coming from Chimezie Metu. The young power forward chipped in with 11 points off the bench to help give the Kings more firepower, but it wasn't enough as the Bulls won their fifth straight heading into the all-star break.

On a side note, Chicago strikes first on the buyout market as the Indiana Pacers bought out the contract for the newly acquired Tristan Thompson and allowed him to hit the open market. Thompson is expected to land with the Bulls post all-star game giving this team some much-needed help on the interior while adding a veteran presence to go with it.