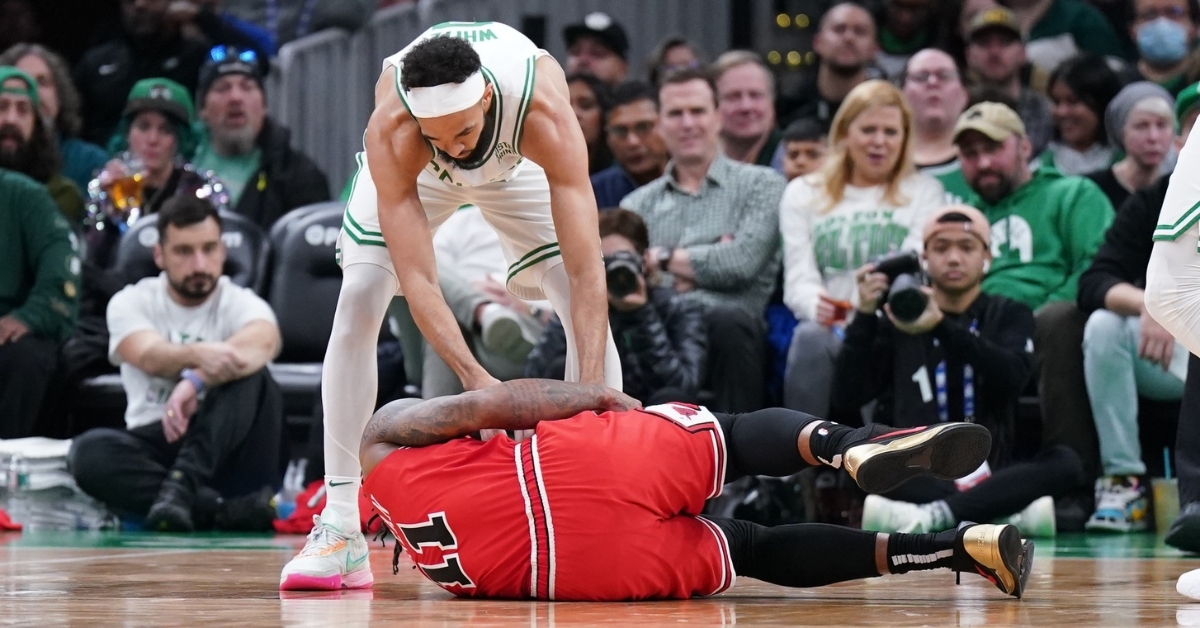 BOSTON - It hasn't always been the prettiest, but you have to give the Chicago Bulls (19-22) some credit for handling adversity this season. Not only did things look bad, but there were talks about this organization blowing things up and starting from scratch. That was until this team won eight of 12 to make a move in the Eastern Conference standings and have put themselves right back in the playoff picture.

Already with two wins on hand against the best team in the East in the Boston Celtics (29-12), the Bulls were looking to close out their season series with a win and take the season series 3-1. That wasn't in the cards on this night as the Bulls battled, but came up short 107-99. However, this was more than just an ordinary loss for the Bulls as Demar Derozan left the game with a quad injury and didn't return as fans await the complete diagnosis of how long he will be out.

With the Bulls leading scorer out of the game, it would have to be up to Zach Lavine to carry this team, and he stepped up when called upon. Lavine led the Bulls with 27 points and continues this excellent stretch of games he has been on. Depending on the severity of Derozan's injury, Lavine has a chance to show the Bulls why he was worth the Supermax deal, as this could be his time to shine.

Before his injury, DeRozan got off to a great start and had 13 points on 66% shooting. Another player who continued his strong run of success was Nikola Vucevic as he continues to play at an all-star caliber level. The Big man complimented Lavine with 21 points, but also added 13 rebounds for another double-double. You also had Patrick Williams give you 10 to round out the double-figure scoring for Chicago.

This season, one of the biggest issues for the Bulls has been finding the right mix to replace Lonzo Ball. Granted, he may not be the best in terms of scoring, but his defense is what sets him apart. With Ayo Dosunmu and Alex Caruso trying to replicate his production, the Bulls continue to struggle in the PG department, and it has cost this team a few games this season.

When it comes to the Celtics, not only do they have two superstars, but one MVP candidate in Jason Tatum. The fourth-year man continues to do his thing on the court, leading all scorers with 32 points in the win. Tatum also recorded eight rebounds and added seven assists to nearly come away with a triple-double.

Jaylen Brown is the other part of the Boston scoring duo, and despite his 0-8 night from three-point range, he still finished with 19 points. That is what makes this Boston team so scary. Not only did you have an off night from Brown, but they have plenty of other guys that can put the ball in the hoop, making them a nightmare to defend for 48 minutes.

Grant Williams was the X-Factor tonight, giving Boston a huge lift off the bench. Not only did he finish second on the team in scoring with 20 points, but he added eight rebounds and played a physical role all game long. Comparing Williams line to the Bulls bench, and nearly outscored the Bulls bench by himself as the Bulls had just 22 points from their second unit.

He was the difference in the game as Williams managed to cover up many of the issues some of the Celtics starters had in this one. Malcolm Brogdon gave Boston another great bench option with 11 points as those two capped off the double-digit scoring options for the Celtics. Had it not been for them, the Bulls would have won this game by double digits and would have taken the season series instead of tying it.