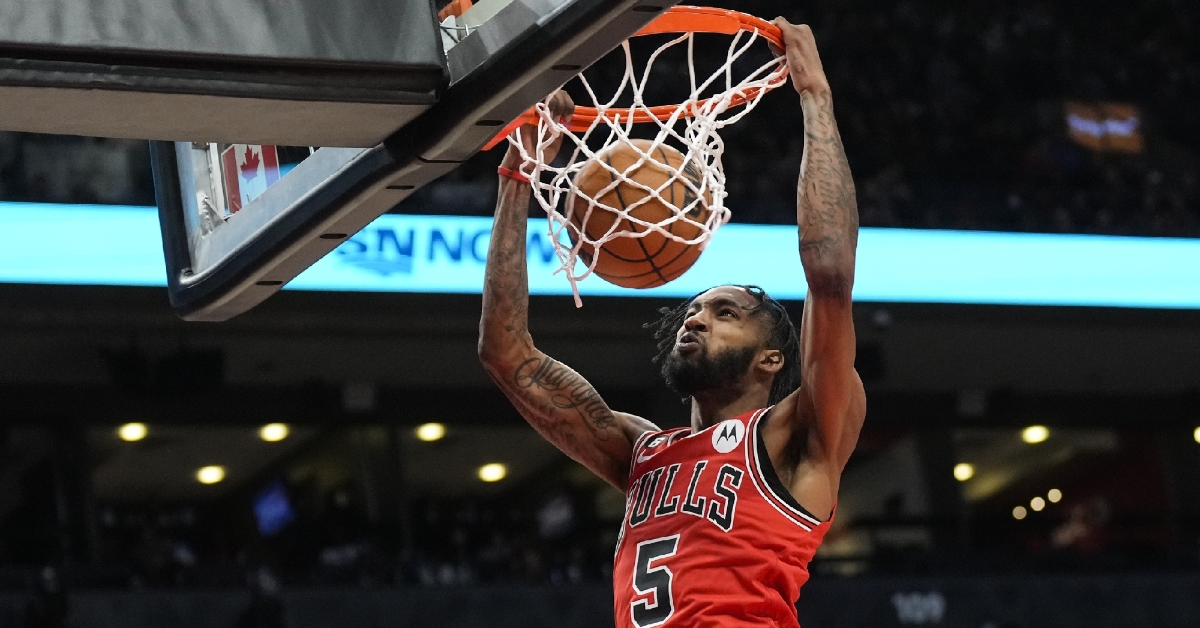 TORONTO - With just two preseason games left until the real fun begins, the Chicago Bulls would love to be playing at regular season form. Hitting the road for their lone road game of the preseason, the Chicago Bulls traveled North of the border to take on the Toronto Raptors at the Air Canada Center.

As mentioned several times, for the Bulls to improve upon last season, their defense will have to improve and be way more consistent than it was a season ago. You saw that inconsistency in the first quarter when the Bulls allowed 38 points, but they locked in the rest of the way to pick up the 115-98 victory.

Demar DeRozan continues to lead the way for Chicago, which shouldn't shock anyone. After putting together a career offensive season last year, Derozan has picked up right where he left off this preseason and dropped a game-high 21 points on 7-12 shooting. However, it takes more than just one player for a team to be successful, and the Bulls have several players that can do damage.

Zach Lavine is one of those guys, but he hasn't been scoring a ton thus far. That is not a concern for Billy Donovan, as the superstar is back at full-strength health-wise and is just trying to get through the preseason. With him struggling to score, Ayo Dosunmu picked up the slack as he will be looking to capitalize on Lonzo Ball's absence.

Dosunmu had an excellent rookie season and will look to build on that this year, as he finished with 14 points and seven rebounds. Another player looking to have a better and more consistent season is Nikola Vucevic, the third part of the Bulls Big Three. Always capable of getting you a double-double, Vucevic had an efficient 13-point night as he continues contributing to this team.

While the starting lineup has gone about doing their things, fans have to like what they have seen from the Bulls bench as they have looked great thus far. Look no further than Javonte Green, who is trying to prove to everyone he is more than just a role player on this team. Not only did he score 17 points to lead the second unit, but he did that on 7-8 shooting. That makes three impressive games in a row for him, as he will fight for a starting spot.

Add in nine points from Andre Drummond, eight from Alex Caruso, and his eight, seven from Coby White, six from Patrick Williams, and five from Dalen Terry, and everyone who saw time on the court scored for Chicago, which is huge.

When it comes to the Raptors, this was a very interesting team a season ago, as they somehow finished fifth in the East despite not having a ton of stars. Give Nick Nurse and his coaching staff a ton of credit, as they had an outstanding second half and got his team to play to their full potential.

One of this team's stars and unquestioned leader is Pascal Siakam. A name mentioned surrounding the Bulls and their trade talks last season, Siakam went about his business to have a solid game as he dropped a team-high 18 points while adding nine rebounds.

Apart from him, the Raptors scoring is going to come from all over the place, including from Gary Trent Jr. Not only did he get off to a hot start, but he was a big reason for the Raptors massive first quarter, only to see him go ice cold the rest of the way. He still finished with 17 points which will be huge for the Raptors this season.

Fred VanVleet may be the second-best player on this team, and when it comes to scoring, he may have the most potential. After missing a lot of time with injuries last season, VanVleet would love to stay healthy this season and was the final starter in double figures with 13 points.

A big reason for the Raptors success was a bench that was one of the better units in the NBA. A big reason was having several players go from the bench to the starting lineup, where they continued to play at an elite level. Delano Banton could be the next guy in line to have a season like that, as he led the bench with 11 points.

Regardless, when the Bulls hold their opponents to under 20 points in two of the final three quarters, including outscoring them 38-18 in the fourth, this team can compete with anyone and beat many teams. Next up for the Bulls are the Milwaukee Bucks as they close out their preseason action on Tuesday.