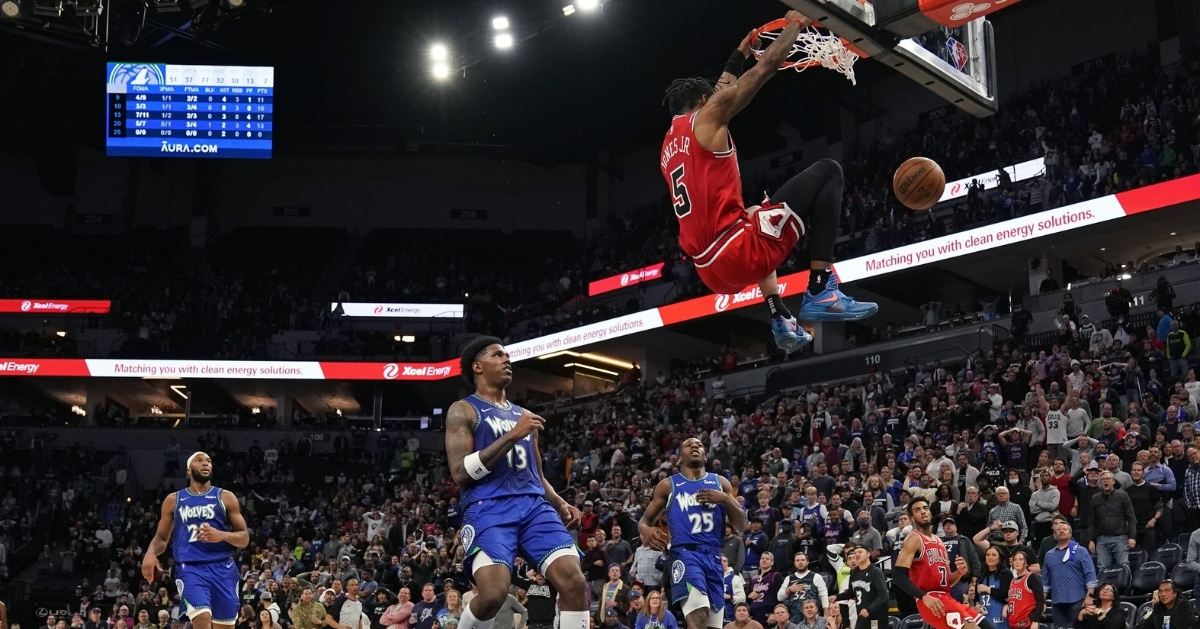 MINNEAPOLIS - Ever since the All-Star break, this has been a different-looking Chicago Bulls (46-36) team. Despite making the postseason for the first time in five years and earning the No. 6 seed, fans wonder what could have been as this team limped to the finish line.

Not only did they go 7-15 after the all-star break, but they fell from the No. 2 seed down to the No. 6 seed. A season-long stretch of injuries played a role in that, but primarily their inability to beat the top teams where they went 1-21 against the top three teams in the conference this season, 1-25 if you count Philadelphia, who fell to No. 4.

Add in a defense that has become a liability over the last month, and you can see why this team has struggled so much. Hoping to end the season on a positive note, the Bulls hit the road to take on the surprising Minnesota Timberwolves (46-36), who made the playoffs for just the third time since 2004 this year.

With their seeds clinched in the playoffs, both teams went with different-looking lineups as many of the usual stars were out. For the Bulls, Alex Caruso, Zach Lavine, DeMar DeRozan, and Nikola Vucevic were given the night off. In contrast, Karl Anthony-Towns and D'Angelo Russell hit the bench for Minnesota.

Even with those names out, it allowed other players to steal center stage. Boy, did they ever, as the Bulls nearly blew a 20-point lead, but held on for the 124-120 win. When you talk about players who had an opportunity, this was the Patrick Williams coming out party the Bulls have been waiting for.

Ever since being taken No.4 overall in the 2020 NBA draft, fans have been waiting to see the player Williams can be. The talent and potential are there, but he has seemed passive at best over his first two years. Over the last two weeks, Billy Donovan has gotten it into his head that he needs to be more aggressive.

That message has been received and received in a big way as Williams went off for not only a game-high in points last night, but a career-high as he dropped 35 points in the win. Should he come close to producing like that in the postseason, the Bulls have another weapon to build around.

Another player who has had a solid season, but a struggle recently has been the rookie Ayo Dosunmu. Among the league leaders in points for rookies, Dosunmu has struggled the last few weeks, but picked a perfect time to drop a career-high 26 points. Those two played a pivotal role in why the Bulls had 70 points at the half and held a 21-point advantage.

Those two were not alone in having big games as several other players needed to step up. Tony Bradley Jr added a season-high 11 points off the bench to go with eight rebounds, while Derrick Jones Jr picked up 12. Those two needed to step up as Coby White was also out of action nursing a sore toe.

Chicago also saw Tristan Thompson fill in for Vucevic and give Chicago 10 points, but Troy Brown Jr stood out the most. In his second season with the Bulls, Brown Jr has struggled as his playing time hasn't been what he hoped. Credit Javonte Green and his play for that, but the Bulls have been very top-heavy when it comes to their rotation.

No one expects Brown Jr to be a contributor come the postseason, but he added 17 points to go with 11 rebounds to show the Bulls he can give you something if called upon. The Bulls would have finished the season on a five-game skid if not for this collective effort.

While the Bulls starters did the job on Sunday, the Timberwolves bench made the most noise as Naz Reid was the only starter in double figures with 14 points. That shows how productive their second unit was to keep things as close as they were.

Leading the way was Nathan Knight, who put together a great second half and terrific fourth quarter. Led by a pair of massive dunks, Knight led the Timberwolves in scoring with 17 points and provided them with eight rebounds. Joining him in having a good game was Jaylen Nowell, who added 15 points.

Those two had the best games off the bench, but there were far from alone. Josh Okogie finished with 13 points, Leandro Bolmaro dropped 11 points, and Jake Layman finished with 10 to pace the Wolves second unit and give them a chance. They played a significant role in the comeback attempt that nearly happened as the Bulls survived to end the season on a strong note.

With the 82-game regular season complete, it is time to focus on the postseason, which kicks off Tuesday with the play-in games. For Minnesota, yes, they made the playoffs, but they still need to get through the play-in tournament, which starts with the No. 8 seed Los Angeles Clippers.

On the other hand, Chicago is guaranteed to be in the field of eight as they secured the No. 6 seed. The only problem is receiving the matchup they didn't want, with the defending NBA champion Milwaukee Bucks getting the No. 3 seed. Not only has Milwaukee dominated the Bulls this season, but they have won 14 straight games against this team, with most of them coming by double digits. Game one of the series is set to begin on Saturday the 16th.