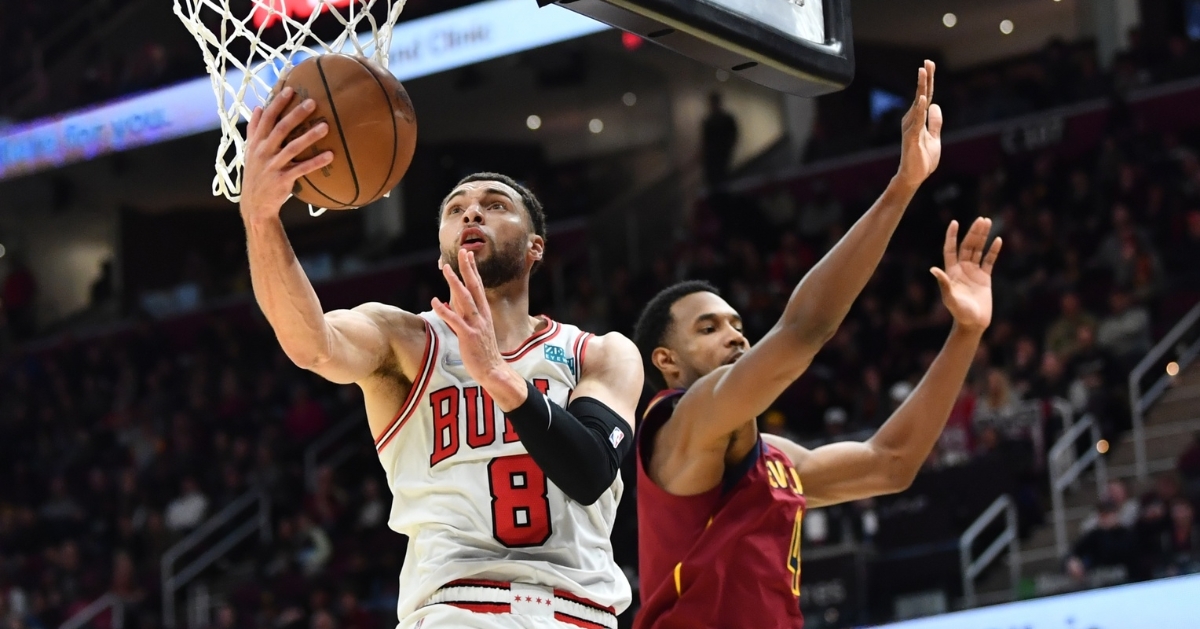 LaVine and Co. got the win over the Cavs (Ken Blaze - USA Today Sports)

CLEVELAND - At this point of the NBA season, the Chicago Bulls (43-31) are in survival mode as they try to finish off their final eight games strong. After falling from first to fifth in the East in three weeks, the Bulls are now closer to the play-in round as opposed to the regular playoff field.

Knowing what is still in front of them this season, the Bulls know they need to win games to ensure they can avoid the play-in round. One of the teams chasing them is fellow Central Division foe Cleveland Cavaliers (41-33), who has also fallen off recently.

Despite not playing at the level they did earlier in the season, Cleveland has also positioned themselves to be in the playoff field as they too look to at the very least make the top six seeds. Although Chicago raced out to a commanding lead, things didn't come easy as the Cavaliers roared back to make things interesting late before the Bulls held on for the 98-94 win to give them a massive victory in the playoff hunt.

If you look at their game the other night against New Orleans, the Bulls raced out to an eight-point lead before their defense let them down the rest. Chicago came out with guns a-blazing for the second straight game as they ripped off a 28-16 first-quarter lead before continuing to do work in the second to lead 53-35 at the half.

A big reason for the massive first half was the overall balance of play from the Bulls offense, as they had several players contributing in a big way. Although not an enormous night in terms of what he is capable of, Zach Lavine led the way for Chicago, putting up 13 first-half points and 12 in the second to finish with a team-high 25.

Looking to bounce out of his recent shooting slump, DeMar DeRozan was efficient for the most part as he finished with 20 in the win. Getting back to the balance we were talking about, you could see in the first half, and all game long as all five of the Bulls starters finished with double figures.

While Lavine and DeRozan continue to take most of the headlines, Nikola Vucevic quietly continues to go about his business delivering critical buckets for the Bulls to come away with 16 points. Ayo Dosunmu added 11 points, with Alex Caruso putting in 10 as those five led the way for Chicago.

Despite being down by 18 at the half, you have to Cavaliers a ton of credit as they did more than enough to make this a game. Not only did they chip away at things in the third to pull within 12, but they controlled the entire fourth quarter helping to pull them within 85-82.

A big reason for that was Darius Garland and his game-high 28 points as he put the team on his back down the stretch. Seeing the Cavaliers ride the momentum swing they were riding, Lavine countered the best way he knew how by attacking the rim to push the lead back out to 12.

Much like they did throughout the second half, Cleveland wouldn't go down without a fight as they battled back to come within four points only to fall short by that same margin. A big reason for the Cavaliers and their massive improvement this season has been the addition of several critical pieces like Caris Levert.

Originally a member of this team, Levert was traded to Indiana in 2020 and was then brought back this year. Since getting traded back to Cleveland, Levert has been on a tear and delivered 17 points in the losing effort. Another massive addition was the pickup of Lauri Markkanen.

The former Bull has given the Cavaliers flexibility for how they can use him and has allowed Cleveland to play with the biggest starting five in the league. Not the greatest in terms of shooting, Markkanen still managed to finish with 14 points to go with nine rebounds. Lamar Stevens rounded out the double-digit scorers for his team with 13 points off the bench as Cleveland came close to completing the comeback only to come up short.

With the win, the Bulls end a brief two-game skid and keep them ahead of the play in line as they give themselves a bit of breathing room in the process. Chicago will cap off this five-game trip with games at New York and Washington before coming home for their final regular-season homestand.