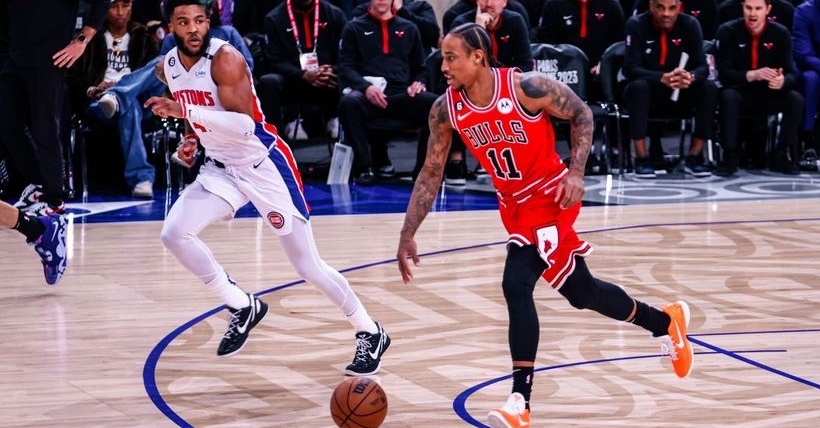 PARIS - For the first time in over two decades, the Chicago Bulls (21-24) took their talents across the pond as they took on the Detroit Pistons (12-36) in Paris. Unlike most weeks where you would be playing three or four games, given the harsh travel of this game, this will be the only game the Bulls have this week.

Looking to build off of what was arguably their most complete performance of the season last Sunday, the Bulls were led by a balanced scoring attack that saw seven players land in double figures, including all five starters. That was more than enough for them to win again as they took care of business 126-108.

For the better part of the last month, Zach Lavine has been the leader of this team and has finally started to look like the player the Bulls paid for. A big reason for that is his knee, as he has said multiple times that he feels he is finally 100%. Lavine continued his strong run of play by leading all scorers with 30 points on 50% shooting.

After missing the last three games with a quad contusion, the Bulls received a massive lift on Thursday as DeMar DeRozan returned to the starting lineup. Despite missing those games, it seemed like DeRozan didn't miss a beat, as he also shot 50% from the field and finished with 26 points. He added nine rebounds for a near double-double as he will be critical to the Bulls success down the stretch.

Stepping up in DeRozan's absence was Nikola Vucevic, who was coming off a career day on Sunday. Granted, he was far from that same form on Thursday, but he still gave the Bulls 15 points while hauling in 18 rebounds. Vucevic is one of the most improved players in the Eastern Conference this season and could be playing his way to an extension beyond this season.

Those three have been the leaders all season, and if the Bulls want to make it back to the postseason, they will need to continue to lead the way. However, it will take more than just three people for them to turn things around, as the Bulls need more balance on the offensive end.

They started to show that balance on Thursday, with Ayo Dosunmu adding 13 points and Patrick Williams 10 points while also bringing in six rebounds. Having all five starters land in double figures is hard enough, but the Bulls also had a pair of guys come off the bench and contribute in a big way.

Derrick Jones Jr had a week to remember in Paris as he not only got engaged earlier in the week, but then put on a 5-6 shooting performance to lead the Bulls bench with 12 points. You also had the hot Coby White continue his great play adding 10 points on his 4-5 shooting. Carlik Jones, Alex Caruso, Goran Dragic, and Dalen Terry all had buckets off the bench as they together their second straight big win.

This season has been a struggle for the Pistons, but it is a much more difficult task when you don't have Cade Cunningham in your starting lineup. Without him, the team is lacking its best player, which is one of the main reasons this team is near the bottom of the Eastern Conference.

Bojan Bogdanovic was one of the big off-season acquisitions by the Pistons this offseason, and he has undoubtedly earned his contract so far. Bogdanovic led the way for Detroit with 25 points while connecting on a team-high three triples. He was the only player with more than 20 points, but Detroit had more than him to account for.

Hamidou Diallo may not have been in the starting lineup, but he put up a starter-worthy performance off the bench. Diallo finished with the second most points on the team with 17 and did that in just 21 minutes. Getting back to the starting lineup, you had two more players that helped lead the way offensively.

Both Saddiq Bey and Jaden Ivey finished with 16 points, but the nine rebounds from Bey made him a duel threat on the court. Jalen Duran rounded out the double-digit scorers for Detroit with 11 more points off the bench, but it wasn't enough to top Chicago.

DeMar on playing in Paris: "It was amazing. One of those games I'll look back years down the line and think about how great it was. It was a beautiful atmosphere and a privilege to be here and be part of this whole thing." pic.twitter.com/zN8FQMKFyu

The #8 means so much ?? pic.twitter.com/Dl5iY7dcCM