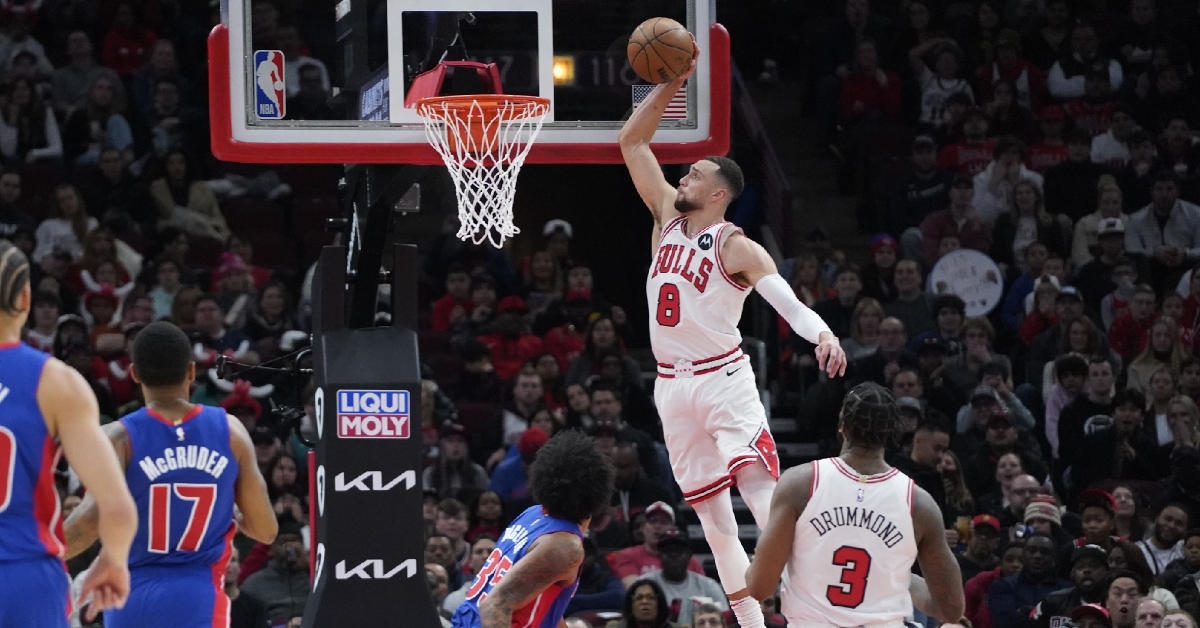 CHICAGO - It may not seem like it, but very quietly, the Chicago Bulls (16-19) are closing in on the .500 mark and getting back into the playoff conversation. A big reason for that has been the recent stretch that has seen them win five of their last six games after struggling for most of December.

Facing off against a Detroit Pistons (9-29) whom the Bulls have beaten 12-straight times, the Zach Lavine show set the tone as he finished with his 16th career 40-point game. 18 of those points came in the first quarter, as the Bulls pulled away when it mattered to pick up the 132-118 win.

Although the Bulls have had the Pistons number for the last several seasons, you have to give Detroit a ton of credit for how they played. Despite being shorthanded due to several suspensions stemming from their previous game, the Pistons managed to keep things close and were tied with the Bulls midway through the fourth quarter. That was until the Chicago defense stepped up when it mattered, as they closed the game on a 17-3 run to pick up the win.

LaVine was a man on a mission from the jump, and this was one of those games where you could tell his knee was fully healthy. Not only did he have a game-high 43 points, but when you shoot 15-20 from the field, you are in a groove that no one can stop. He was the key to the Bulls victory, and Chicago hopes this is a sign of things to come.

A big reason for the Bulls recent string of success has been the emergence of the big three finally playing as a cohesive unit. They continued that trend on Friday, with DeMar DeRozan adding 22 points and Nikola Vucevic picking up 19 points with nine boards. Those three accounted for better than 80 points in the game, making the team tough to beat.

Making his lineup was Alex Caruso, who missed the last few games with a shoulder injury. Not only was his presence felt on the defensive end, but he put forth one of his better showings of the season to finish with eight points while knocking down a clutch triple late in the game. Chicago also saw Ayo Dosunmu add 11 points, and Andre Drummond came up with 12 points off the bench to give the Bulls five double-digit scorers.

Had the Pistons been at full strength, the result of this game may have been different. However, you play the cards you are dealt, and the Pistons were dealt a tough draw on Friday. To their credit, they didn't let that bottom them as they managed to hand with the Bulls for about 42 minutes until that late game run did them in.

Rookie Jaden Ivey did his best to lead the Pistons to the upset as he finished with a team-high 22 points while adding six assists. He wasn't alone in having a great game, with Bojan Bogdanovic adding 20 points of his own to give the Pistons two 20-point scorers to pace the offense.

Granted, those two were the ones doing most of the scoring all game long, but Detroit had several other options they could lean on. Those options were phenomenal and played a massive role in why things were as close as they were for as long as it was. Isaiah Stewart added a strong double-double showing as he came away with 16 points and 10 rebounds.

Since Jeremi Grant was traded to Portland, Stewart has been one of Detroit's more consistent players and continues to improve in the paint. Saddiq Bey dropped 10 points of his own to give Detroit four starters with at least 10 points. Even with that kind of production, the Pistons still had more to offer, with Alec Burks coming through with 19 points off the bench.

His three-point shot was a big reason for his success, as he connected on all four of his triple attempts. Rodney McGruder added 11 more points to cap off the double-digit scorers, but it wasn't enough to top a Bulls team starting to play well.

With the win, Chicago is now above the play-in line for the playoffs, and they currently own the No. 10 spot in the conference. They are just 1.5 games out of the eighth seed and two games from being above the play-in line, as there is still plenty of season left. The Bulls return to the court tomorrow for their final game of 2022 as they close the year with Cleveland.