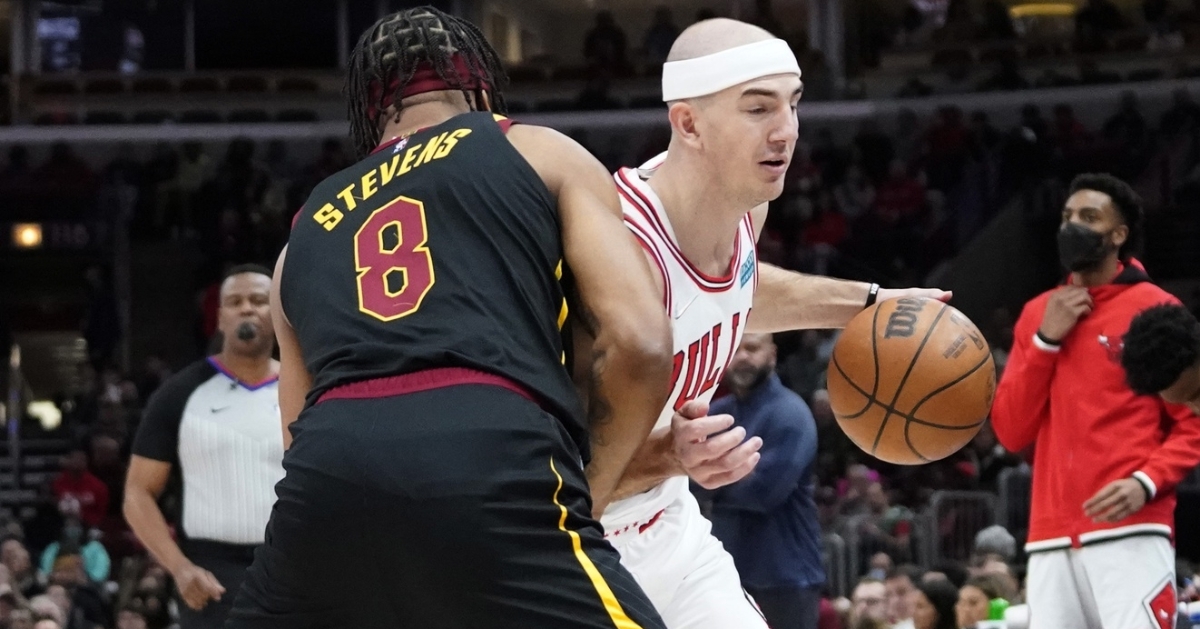 Caruso is back from his injury (David Banks - USA Today Sports)

When the 2021-22 NBA season began, no one expected the Chicago Bulls (41-26) or the Cleveland Cavaliers (38-29) to be as good as they have been and in the position, they are in. Here we are, one month from the postseason, and both teams are in the playoff picture with the Bulls in the top half of the league while Cleveland hovers around the final spot before falling to the play in-game.

In a matchup of two drastically different-looking teams that feature the largest starting five in Cleveland up against the smallest starting five in Chicago, these two teams have gone at it this season and will be going at it for several years. After splitting their first two meetings of the season, Chicago was looking to get the upper hand as this would be a big win for their playoff confidence going forward.

Still shorthanded when it comes to some players, the Bulls received a big lift as Alex Caruso returned from a 22-game absence after fracturing his wrist in Milwaukee. Caruso has been an essential part of the Bulls success all season as he ranks near the top of the league in steals. He is not going to get you many points, but what he does on the defensive side makes the biggest difference as the Bulls were impressive on that end of the floor, picking up the 101-91 win.

While Caruso returned, Zach Lavine was out for the game as he continues to deal with off-and-on knee pain. That meant that DeMar DeRozan and company would have to play that much harder and pick up the slack left by Lavine. DeRozan had a terrible night shooting the ball where he went 9-26, but still managed to lead the team with 25 points connecting on all seven free-throw attempts.

Part of the reason the Bulls were able to make do without Lavine was the overall production from their starting five as Nikola Vucevic started fast and had a solid game. His 20 points was good for second on the team, but he also added 14 rebounds to post another double-double to his team-leading total. With Lonzo Ball still on the mend from a torn MCL, Ayo Dosunmu has not only taken over the point guard role, but has stepped in a big way as he added 17 points in the victory.

While those three played the most significant role in the Bulls overall success, two players landed in double figures, with Javonte Green (12) and Caruso (11) off the bench giving the Bulls five players with double figures. That is always tough to defend when you have that many players dropping at least 10 points, and it helped the Bulls do what they needed to do in order to win.

For the Cavaliers, it was no secret as to what got their offense going with Darius Garland leading the way. With Collin Sexton out for the season with a knee injury, Garland has stepped up and has shown he can lead this team as he tied DeRozan with a game-high 25 points to pace the Cavs offense. Much like Chicago, the Cavs had plenty of balanced scoring, but to overcome some missing pieces with Lauri Markkanen and Jarrett Allen out with injuries.

Evan Mobley continues to be one of the better young bigs in the game and put his full arsenal on display. Whether it was posting up in the paint or stepping out to hit a jumper, Mobley was tough to defend, especially in the first half, as he finished with 17 points to go with seven rebounds. Outside of them, the offense was tough to come by for Cleveland, but they did see Cedi Osman come through with 14 points off the bench to finish third on the team in scoring. Kevin Love wrapped up the double-figure scorers for the Cavs with his 10 points 11 rebound double-double, but it was not enough as the Bulls picked up a massive win against a playoff-caliber team.

Although this isn't beating a top team, the Bulls have had problems knocking off playoff teams this season, so to see them get this win without Lavine was huge. Looking ahead to the coming weeks, Chicago will continue to get healthy as both Ball and Patrick Williams are expected back later this month or in early April, putting the Bulls at full strength for the postseason.