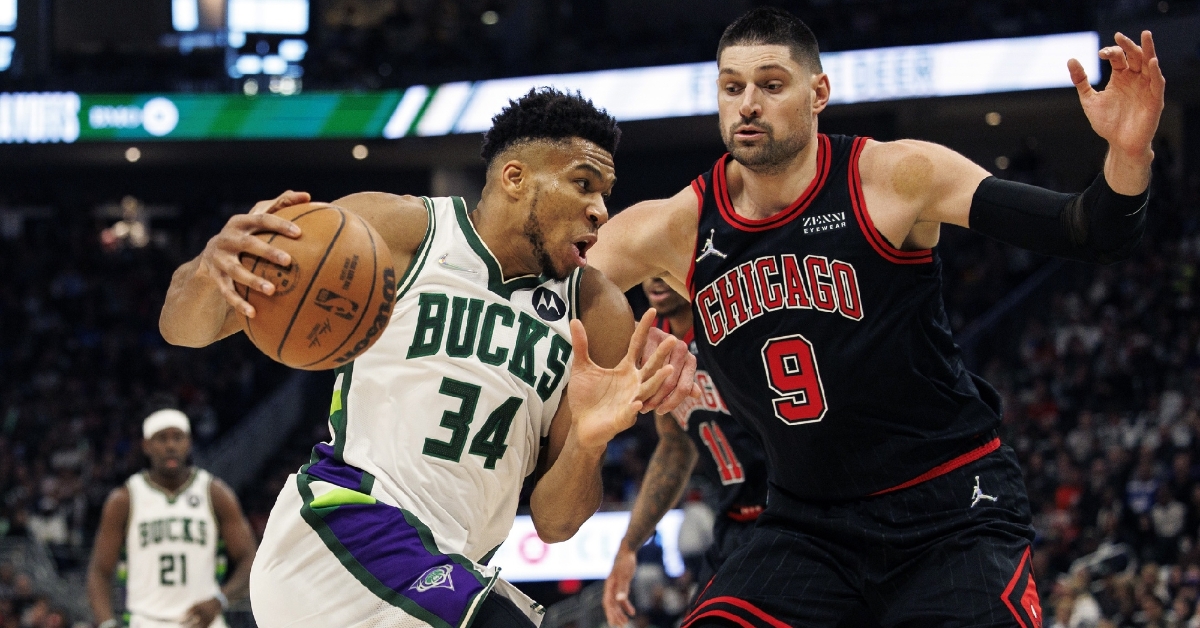 MILWAUKEE - For the first time since the 2016-17 season, the Chicago Bulls have made the postseason. Following their 46-36 mark during the regular season, it also marked this team's first winning season since 2015.

While all that is fine and dandy, the Bulls have plenty of work that needs to be done if they expect to make a deep playoff run. In what was the worst possible matchup for Chicago, the Bulls must find a way to beat the No.3 seeded Milwaukee Bucks, who have their number and are the defending NBA champions.

This is a team that went 4-0 against Chicago this season and has gone 17-1 against them over their last 18 meetings, and you can see why this matchup was a nightmare scenario for this team. When looking at the box scores of their meetings this season, apart from the 94-90 loss the first time around, the Bulls didn't stand a chance, losing the last three by an average of 19 points.

If the first five minutes were any indication of a sign for things to come, this will be a very short series for the Bulls as the Bucks raced out to a 21-5 lead and had the Bulls searching for answers. That 16-point deficit early on was not a good place to be, but it was the largest lead Milwaukee had in the game as the Bulls did a great job battling back.

A big reason for the sudden shift in momentum was the Bulls ability to take away the paint and limit the chances the Bucks were getting on the inside. That allowed the Bulls to get out and run, which they do a great job of. That 16-point lead was cut to eight at the half and then following a 13-0 run in the third, Chicago grabbed their first lead of the game, 69-64.

As expected, the Bucks answered that run with one of their own, but the poor shooting from both sides in that final quarter kept fans glued to the court. With Alex Caruso becoming the Caruso the Bulls paid for again, Chicago was within one point with four minutes to go and had a chance to steal game one.

That was until their horrendous 32.3% shooting performance got in the way as Chicago couldn't come away with the clutch buckets needed and fell to Milwaukee 93-86 in game one. Give Billy Donovan some credit for his adjustments, as this team may have found something.

When you look at the Bulls roster, not many of them have prior postseason experience, but one of them that does is Nikola Vucevic. The Bulls big man has struggled against bigger teams this season, but had a phenomenal game to finish with a team-high 24 points while adding 17 rebounds.

Another player with postseason experience was DeMar DeRozan, who was looking to answer his best regular season to date. Like most of the team, DeRozan struggled from the field, going 6-25 as he finished with 18 points. We have talked about playoff debuts all weekend, and for Zach Lavine, this was the moment he has been waiting for.

Big stage and all, Lavine didn't deliver the way he would have liked adding just 18 points of his own, but committing five fouls. Perhaps the two most important players in this one for Chicago were the emergence of Coby White and Alex Caruso.

White picked up 12 points off the bench and was a massive part of the 13-0 run that gave Chicago the lead. Caruso may have finished with just seven points, but his tenacity on defense saw this team play their best defensive game in months, only to come up short in the end.

A big reason for the Bucks success against the Bulls in recent seasons has been the inability to stop Giannis Antetokounmpo. The Two-Time MVP is a matchup nightmare that, quite frankly, the Bulls can't stop. He led all scorers with 27 points while adding 16 boards, but the Bulls made him work for it as he too played with five fouls.

Apart from him, the Bucks have an experienced postseason cast filled with players who know how to step up. After missing 60 games with a back injury this year, Brook Lopez has fit right back into the mix as he added 18 points in the win. That allowed fellow big man Bobby Portis to move back to the bench as his spark continues to be contagious, adding 10 points and 12 rebounds off the bench.

While the Bucks front court sent a message all game, what about the backcourt. Although just 10-29 combined shooting, the Jrue Holiday and Khris Middleton connection came up huge down the stretch as they converted on several tough buckets to keep the Bulls back. Holiday finished with 15 points while Middleton added 11. That type of production was huge, but give the Bulls a ton of credit for battling the way they did.

Game two is set for Wednesday at 7 PM CDT.