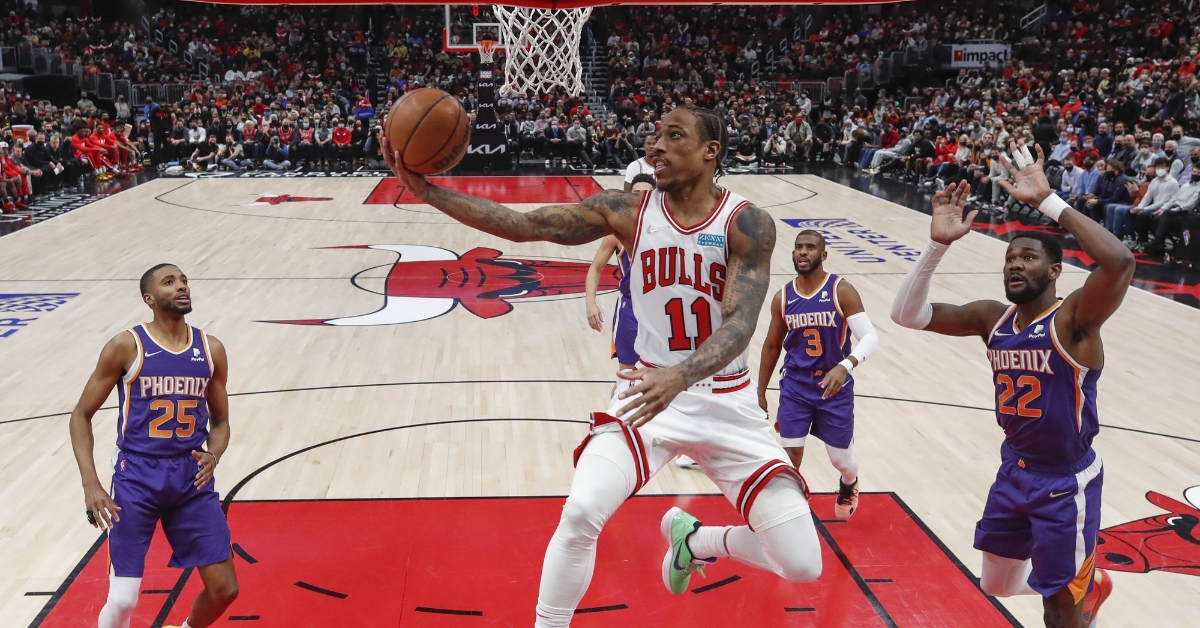 CHICAGO – Not only were the Chicago Bulls (33-21) coming off a tough loss against Philadelphia on Sunday, but things didn't get any easier for them on Monday night as they welcomed the league's best into town. Looking for a statement win against the Phoenix Suns (43-10), the Bulls knew they would be put to the test as this is an impressive basketball team.

Chicago was given some good news prior to the game as both Zach Lavine and Coby White returned to the lineup following a two-game absence as the Bulls would need all the help they could get. Even with that, things didn't look good early as the Suns raced out to a hot start and didn't look back. Not only did Phoenix have a seven-point lead after one, but they went on to outscore the Bulls 31-20 in the second to help build an 18 point cushion.

That grew to more than 20 at one point in the third before the Suns held a 19 point advantage after three-quarters of play. Typically this game would have been over when you look at how the Suns have played this season, but you have to give the Bulls credit for how they played in the final 12 minutes. Led by their dynamic guard duo, the Bulls not only scored 41 points in that final quarter but made a game of things.

They took nearly a 20-point advantage and turned it into a single-digit game in the blink of an eye. At one point, it looked like this was going to be a comeback win for Chicago, but the end result wasn't in their favor as they lost 127-124. Still, that doesn't take away what this team accomplished down the stretch, and fans should take note of that.

As mentioned, the Bulls were led by their All-star guard duo as they combined for 70 points in the game. DeMar DeRozan led all scorers with 38 points on 16-27 shooting, while Lavine added 32 points, including four triples. Take away those two, and the Chicago offense stalled with only Nikola Vucevic and White picking up double figures. White returned to the lineup to drop 13 of the teams 35 bench points, while Vucevic struggled against the Phoenix size to finish with 13 points on 6-15 shooting. He did add 12 rebounds to add to his double-double total.

For the Suns, it was all about balanced scoring as six players tallied double figures in the win. That included all five starters, with Devin Booker leading the way. His 38 points not only led all scorers with DeRozan, but 16 of those points came in the first quarter as he got off to a hot start. Chris Paul continued to do his thing adding 19 points to go with 11 assists, while Mikal Bridges chipped in with 15 points.

Phoenix also saw Jae Crowder (10) and DeAndre Ayton (13) land in the double-figure column for starters, with Crowder adding 10 rebounds for a solid double-double performance. Not only did the Suns get plenty of scoring from their starters, but their bench was just as good, especially JaVale McGee. In 23 minutes of action, McGee went 7-9 from the field to finish with 16 points, as his presence on the second unit has been a considerable upgrade for the Suns this season.

A lot of talk was made about the Golden State Warriors based on their start, but the Suns have been the best and most consistent team all season. A 43-10 record is no joke, and when you look at the season they had last year, it shouldn't shock anyone. They were the biggest surprise in the league last year and made the NBA finals before falling to the Milwaukee Bucks in six.

Here we are one season later, and the Suns are not only in first place in the West, but have the best record in the NBA. This team is not only talented, but extremely well-coached, which is a deadly combination for anyone going up against them. I know there is a lot of season left, and anything can happen, but they should be considered the title favorites, at least for right now.

There is no such thing as a moral victory in sports, but Monday night could be considered one for the Bulls. I know this is another loss bringing their record to 7-12 across their last 19 games, but the way they lost can serve as a moral victory. Any time you are down by 19 after three quarters, it is never easy. Throw the Suns into that mix, and no one would have faulted the Bulls resting their starters over the final 12 minutes.

Instead, this team continued to show the fight they have as a team and not only outscored the Suns during that final quarter, but made things very interested. Chicago nearly capped off a massive comeback only to fall by three points. If this loss taught this team anything, it would be that they can play with the Suns for an entire 48 minutes.

Much like they have done a lot this season, Chicago has gotten off to slow starts, putting them in holes early. You can overcome that against bad teams, but not a team like Phoenix. Credit them for nearly coming back, as that would have been a colossal win for this team.

In a league that is getting younger by the minute, Phoenix has what I like to call a glass of fine wine on their team. For those who don't know what I am referring to, fine wine tends to get better with age. That is the case regarding Paul as he continues to play at an MVP level.

Nearing the end of his NBA career, Paul was viewed as a has-been five years ago after some injuries derailed what was a great career. However, in the years since, Paul is not only rejuvenized, but he is looking like an MVP, and that is impressive when you think about it. Phoenix has clearly injected some life into his career, and now he is playing the best he has in over a decade.

Viewed as a hall of fame caliber player, Paul is missing just a championship ring to his name to complete what could be a top 10 PG of all-time legacy. That ring could be coming this season, and if it does, Paul will go down as one of the best PGs of all time and will be a first-ballot Hall of Famer when all is said and done.