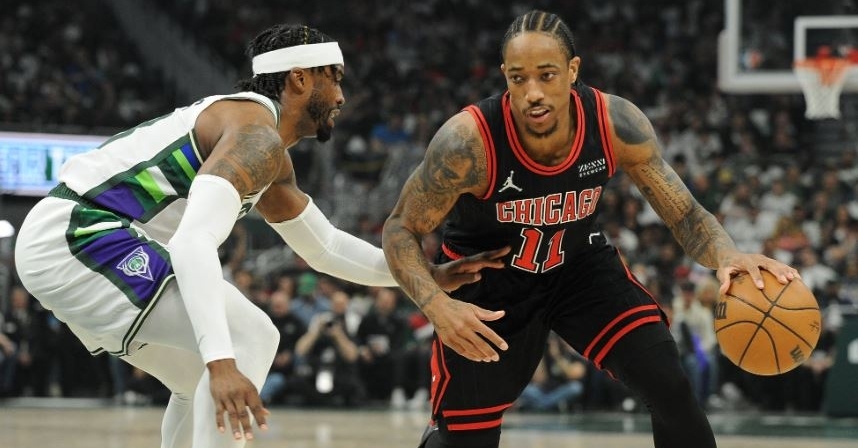 MILWAUKEE - When the playoffs began, and we looked at the matchups, seeing the Bulls facing the Bucks was the worst possible matchup for them. After all, you have a team that was swept during the regular season, and has lost 18 of the last 19 against Milwaukee, so no one liked their chances coming in.

That is why they play the game, as the Bulls have done way more than earn some respect and have shown the Bucks they will not be a pushover. Following a game one loss that saw the Bulls erase a 16-point deficit and grab a second-half lead, it was the Bulls turning the tables as they were the ones racing out to 18 early in the second half.

Much like game one, a comeback effort was in store as the Bucks made several runs at the Bulls only to see Chicago stretch things back out in the fourth. Despite some sloppy play late and the Bucks best efforts to get back in the game, DeMar DeRozan had his playoff moment as he dropped a game-high 41 points to lift the Bulls to the 114-110. The win not only ties things up with the series heading back to Chicago, but it is the Bulls first playoff win in five years and first win against Milwaukee in nearly four.

Following their terrible shooting night in game one, the Bulls big three of DeRozan, Zach Lavine, and Nikola Vucevic vouched that a performance like that wouldn't happen again. When you are holding a 63-49 lead at the half and with nearly as many points as you had in game one, you had to like your chances on the floor.

As expected, the Bulls went as far as their big three took them as that trio combined for 85 points, 41 coming from DeRozan. Vucevic has shown up in a big way all series long as he finished with 24 points for the second straight game on 10-18 shooting and added 13 rebounds. Lavine also added a 20-point game while shooting 7-13 as this was the Bulls team the fans have been waiting for.

While those three deserve a ton of credit, and rightfully so, what about the rest of the roster. Patrick Williams continues to play at a high level as he was the final Bulls scorer in double figures, dropping 10 points and adding nine rebounds. After an impressive showing off the bench in game one, Alex Caruso was added to the starting lineup and, despite scoring just nine points, continued to be a menace on defense which helped set the tone for the Bulls in the win.

Chicago has been fortunate enough to have three capable scorers this season, but for the Bucks, it is all about the star Giannis Antetokounmpo. The Two-Time MVP continues to go about his business on the court, leading the way again with 33 points, 18 rebounds, and nine assists. His team will go as far as he can take them, but he needs more help than some would think.

Picking up the slack over the last two games has been fellow big man Brook Lopez. Lopez has been a pleasant surprise through two postseason games as he finished with 25 points to go with six boards. The key to a Bucks repeat hinges on the play of their supporting cast, especially the guards that this team has.

Khris Middleton has always been seen as the No. 2 option, but has been inconsistent come the postseason. Middleton followed up his nine-point game one performance by adding 18 this time, but he didn't live up to the moment again. To make matters worse, Middleton collided with Lavine in the fourth quarter and now has a sprained MCL as his status going forward could drastically impact this series.

Along with Middleton comes Jrue Holiday, who had a significant role. Despite dropping 15 points and adding six boards, Holiday was tasked with guarding DeRozan, a player he grew up against in the fourth quarter. Given how hot DeRozan was, it wasn't going to matter who had him on the floor, but Holiday at least made him work harder.

His presence and physicality on DeRozan allowed the Bucks to get on the runs they got and helped them claw back within one possession. Fortunately for Chicago, DeRozan and company had just enough left in the tank to hold off Milwaukee. The Bucks also got 11 points from Wesley Matthews as all five of their starters landed in double figures.

With the series knotted up 1-1, things shift to Chicago for games three and four as the Bulls have an excellent opportunity to make some noise. Until the final week of the regular season, Chicago had the best home record in the Eastern Conference and then lost four of their last home games. Chicago is still one of the league's better home teams, and the United Center crowd will be rocking on Friday and Saturday.

Considering the health and uncertainty of Middleton right now, this could be a must-win game for the Bucks. If Chicago can take both games or at least one game, this series may go seven games. However, should the Bucks look like the Bucks, it will be hard for the Bulls to get back to the UC for game six.