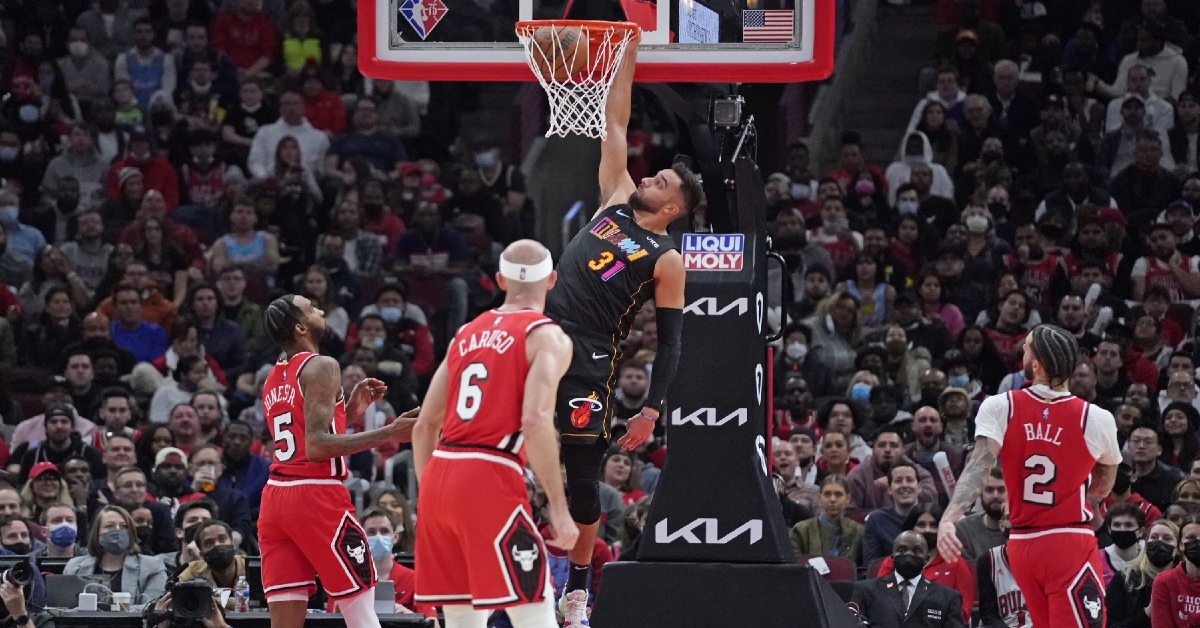 CHICAGO – There were two extremely active this free agency who underwent drastic changes to their roster. Those teams were the Miami Heat (13-7) and the Chicago Bulls (13-8), who met for the first time on Saturday night. Not only have these teams been impressive this season, but this had the makings of a possible playoff matchup as both of these teams are incredibly well-coached.

Not only did this game feature a matchup between the best defense in Miami, but the Bulls have a strong defense themselves, ranking in the top 10 in the league. Both offenses are top 10 units also, which is why these teams have sat near the top of the Eastern Conference this season. Take away the first quarter in which the Heat outscored the Bulls 27-20; Chicago was more than up for the challenge, outscoring the Heat across the next two quarters, including grabbling a two-point lead after the third quarter of play.

Like all good teams do, you find ways to win when the game matters, as both teams were looking to deliver the knockout blow in the fourth quarter. The Heat managed to get the upper hand as the final quarter went on, building their lead to a two-possession game and having Chicago on the ropes. The Bulls did a great job to keep things close, but in the end, it was the Heat coming through, securing the hard-fought 107-104 win.

Take away the Lakers this offseason, and Miami and Chicago were the two teams the most active with the roster. For the Bulls, two of their offseason pickups were on full display last night, with DeMar DeRozan leading all scorers with 28 points. Despite a rough night shooting the ball from deep, DeRozan shot the ball very well, going 11-19 from the field. Another offseason pickup was Alex Caruso, who is having a great season in his own right.

Caruso has bounced between starter and reserve this season, but his defensive ability on the floor is garnering recognition to be the team's MVP this season. He showed up in a big way last night, dropping 22 points off the bench as his performance was crucial. With Zach Lavine being held to 16 points and Lonzo Ball 11, the play of Caruso off the bench was a big difference maker to keep the things close.

For Miami, it was their offseason pickup Kyle Lowry bringing to them what DeRozan brings to the Bulls as he led his starting lineup with 19 points. He wasn't alone in having a strong game, with Jimmy Butler adding 18 points and Duncan Robinson chipping in with 16 as the balanced scoring for the Heat continued.

For the most part, the Bulls defense did a great job keeping the Heat's offense in check, but the play of Gabe Vincent off the bench proved to be the most significant difference in the matchup as he led the team with 20 points and helped the Heat hold off the Bulls.

The Miami defense is legit

Many people have been talking about the job Billy Donovan has done with the Bulls and their defense, but Erik Spoelstra is arguably the best and most underrated coach in the league. Their offense may not be as explosive as some of the teams out there, but their defense is legit and continues to prove how good they are.

Not only did they make the NBA Finals two seasons ago, but they made the playoffs again last season before falling to the Milwaukee Bucks. A big reason for that has been a defense ranked near the top of the league for several seasons. This season is no different as the Heat are the top defensive team in the league.

Many teams have great offenses, but a great defense will determine who wins and who doesn't win a championship. The Heat not only have the playoff experience, but have the defense that can shut down any high-powered offense. The Bulls found out firsthand how tough that defense is last night, especially with Lavine being held in check with just 16 points.

The Caruso, the Bulls, paid for

for the most part, Caruso has given the Bulls everything they could have asked for and more as the veteran has played at a high level. Sure, his scoring may not be where the Bulls have wanted, but his defensive ability and leadership on the floor can't be replaced, as that alone has made this Bulls team much better.

Caruso has always had the capability to score, but up until this point hasn't had a ton of games where that has been on display. Last night was a prime example of what he can bring to the table as this was the game that Caruso and the Bulls were waiting for. Not only did he continue to go about his business on the defensive end with one steal, six assists, and three rebounds, but he was finally able to showcase that offensive skillset dropping 22 points.

For the first time this season, Caruso saw his shots fall consistently, as they haven't been falling at the rate he would like to see this year. No one is expecting him to go out and score like this on a nightly basis, but the thing he proved in this one was that he is more than capable of picking up the slack when someone else struggles, which the Bulls would love to see more of.

The East is wide open

Through the team's first 20 games this season, the Bulls have seen the worst in the league and the best in the league, with wins translating from that more often than not. Chicago not only has victories against the Knicks and Nets, but they have also beaten some of the best teams out west and continue to show they can play with anyone.

However, the Bulls have also experienced some recent setbacks, which included losses to Indiana and Houston. One thing is certain about this team: they are a good team capable of making some noise this season. Fortunately for them, they play in the Eastern Conference, which is wide open at this point.

With Golden State and Phoenix continuing to be the class of the league, the Eastern Conference is much more balanced, with the Nets leading the way at 14-6 with the Bulls checking in with the fourth seed right now at 13-8. In fact, 13 of the 15 Eastern Conference teams have 12 losses or less, which shows you the parity in the East. This is a conference with plenty of contending teams, and it should be a race to watch all season.