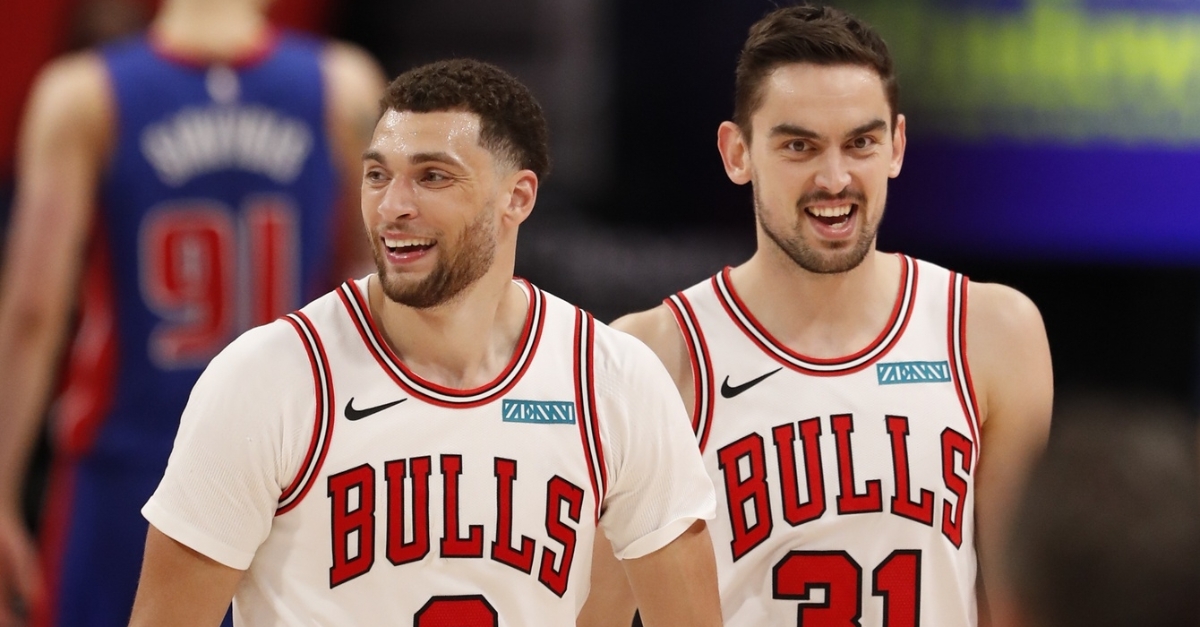 With just two weeks remaining in the NBA regular season, the Chicago Bulls have their backs against the wall as they need to win as many games as possible in hopes of securing the final play-in spot. The Bulls are coming off two straight wins heading into Sunday's contest with Detroit and, in the process, have gotten Zach Lavine back at the perfect time.

Before the game on Sunday, Daniel Theis was ruled out with a hip injury putting the Bulls lineup into another shuffle. Thaddeus Young was given the task to replace Theis, and the rest of the lineup remained in tack. Led by Lavine and his 30 points, the Bulls starters accounted for nearly 90% of their points on Sunday, with Nikola Vucevic adding 29 points and 16 rebounds with Coby White chipping in with 21 more.

Those three paced the Chicago offense all game long and did more than their share to keep the winning rolling. Even with the Pistons getting 21 points from Killian Hayes and Saddiq Bey adding 20 of his own, it wasn't enough as the Bulls made quick work of Detroit, topping them 108-96 for their third straight win.

Where has this team been?

After struggling since the trade deadline, May has gotten off to an excellent start for Chicago as they are 4-1 to begin the month. That includes three straight wins to close out last week as the Bulls are starting to look like a playoff team once again.

Their defense has been great, holding another team to under 100 points, and the offense is getting back on track as the trio of Lavine, Vucevic, and White are shouldering the load. Even during the struggles of late, fans knew this team was better than what they are showing on the floor, and now they are starting to show their potential.

Granted, these three wins haven't come against the league's elite teams, but they did beat both Charlotte and Boston ahead of the Detroit game, and both are playoff teams. With four games left and three of them coming against playoff teams, the Bulls have their work cut out for them if they want to make the postseason. They need to win as many games as possible and get some help as they are keeping the pressure on both Washington and Indiana.

Too little too late?

We saw the potential the Bulls had before the deadline when they surged into the sixth seed in the east. However, since then, the team has gone south and has gone seven games under 500 since making the deadline deals. That is never a good sign for a team looking to make the playoff, but they are starting to play well, as mentioned above.

I would even argue that their last three games have been the best games this team has played all season long, and hopefully, it isn't too late. When the Bulls are playing the way they are right now, they will be tough to beat. They struggled for so long that they let other teams get ahead of them, and now it will be tough to catch those teams.

Washington has been on fire, winning 11 of their last 15 but have cooled off as of late. Still, they have moved into the ninth seed and could be on the verge of more. On the other hand, the Pacers are going backward as the injury to Miles Turner has hurt them. Looking at their final five games, things will be equally as challenging for them as they have three playoff worth teams along with Toronto, who is fighting for that 10th seed with Chicago.

Washington has a pair of games with Atlanta remaining with Charlotte and Cleveland mixed in. They have the easiest of the remaining schedules down the stretch, so they may be a lock to get in at this point. That means it will come down to Indiana and Chicago for the final spot in the playoffs.

Since being inserted into the starting lineup, Daniel Theis has been a pleasant surprise providing the Bulls with a much-needed scoring boost. He is playing the best basketball of his career now and is certainly making a point for the Bulls to resign beyond this season.

Theis was the latest to miss a game as he missed Sunday's game with a hip injury. While it is not clear how severe the injury is, his absence is a massive blow to this team, and they will need him for the upcoming schedule.

Not only does he bring a much-needed physicality to the floor, but he is more athletic and a better shooter than what people give him credit for. When you look at his production, he is playing the way Chicago expected Wendell Carter Jr to play, so essentially, he is now the starting C going forward.