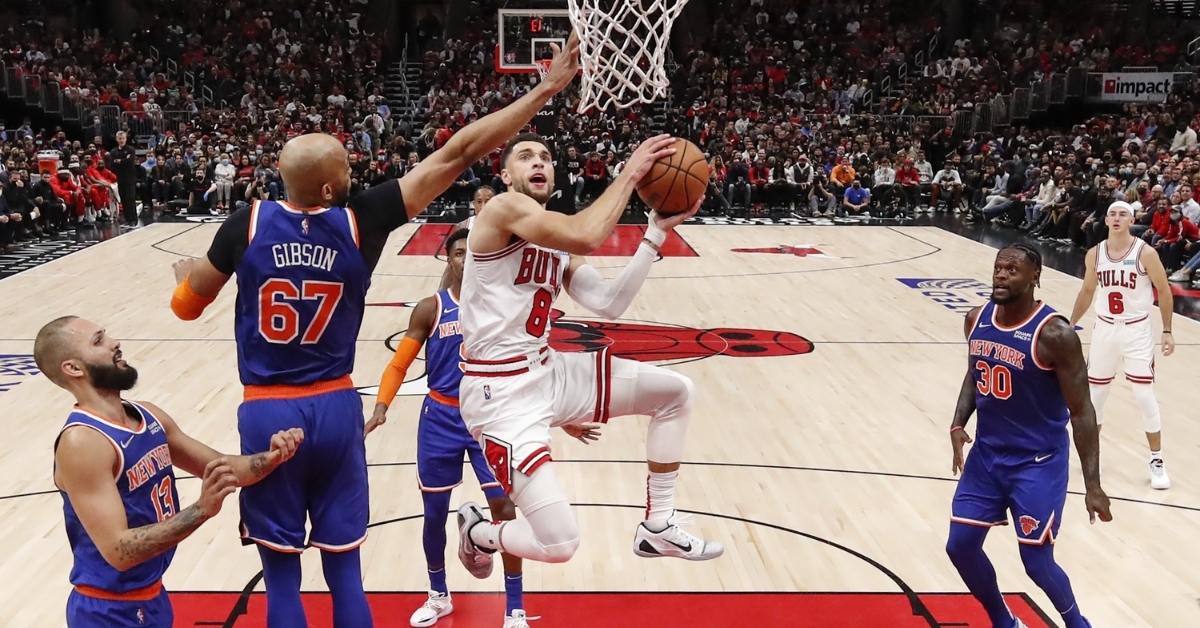 CHICAGO – In a rivalry renewed, the New York Knicks (4-1) traveled to the Windy City as they took on the Chicago Bulls (4-1). Entering Thursday as the last remaining unbeaten team in the Eastern Conference, the Bulls had an opportunity to make a statement as they are beginning a very difficult stretch of games filled with high-quality opponents.

Whether it be the offseason acquisition Kemba Walker knocking down five three-pointers, R.J. Barrett or Evan Fournier, the Knicks continued to use the three-point line to their advantage. However, the first half was better than the second. Walker led the Knicks in scoring with 21 points, but New York saw contributions from Barrett (20), Julius Randle (13), and Derrick Rose (12) as they made life difficult for Chicago.

Not only did the Knicks race out to a 14-point first-quarter lead which the Bulls did a great job chipping down to four at the half, New York continued to dominate the second half, especially after Patrick Williams was lost for the game with a wrist injury. The lack of size proved costly, with Randle and Mitchell Robinson going to work on the inside as the Knicks built a 104-91 lead with less than four minutes to go in the game.

Looking at what was going to be a near 20-point loss for the Bulls, they used the final three minutes and change to play their best ball of the night as suffocating defense turned into offense. As poorly as the team shot all game long, Zach LaVine still scored 25 points joining Nikola Vucevic (22) and DeMar DeRozan (20) with 20-point efforts.

Over the next two minutes, the Bulls used a 10-0 run to pull within three as Vucevic knocked down a huge three from the top of the key to make things 104-101. Needing a stop in the final 30 seconds, DeRozan came away with a near steal, but his foot was on the baseline, keeping the ball in New York's possession.

A few seconds later, the Bulls came away with the ball again, where LaVine wasted no time throwing down a two-handed tomahawk slam to pull Chicago within 104-103. With a chance to ice the game, Randle took to the free-throw line for a pair of attempts and saw both of his shots clank off the rim, giving the ball back to Chicago with less than 10 seconds left. Wondering who would take the last shot, it was DeRozan getting the ball as his mid-range attempt was off the mark, and the Knicks handed the Bulls their first loss of the season 104-103.

Other players who were part of that team were, of course, Rose, and Taj Gibson, who played significant minutes down the stretch for the Knicks last night. Before the start of the game, the Bulls also saw Joakim Noah return to the United Center as it was Noah appreciation night.

In other words, last night was a bit of a family reunion as so much history returned to the floor last night. This is not the same team as the 2011 Bulls, but this is the most excitement the Bulls franchise has had since then. Despite the loss, the Bulls proved that they can hang with anyone in the league, which is a massive step for this team.

When the season started, one of the significant concerns with this team was their lack of size at the Power Forward position. Going a bit further than that, outside of Tony Bradley Jr and Vucevic, the Bulls have no players over 6-8, which is a growing concern. There are times when this team can get away with limited size, given the overall skill and athleticism of the team.

However, it was bound to happen where size was an issue, and that has happened over the last two games. Despite being outrebounded by 20 against the Raptors earlier in the week, Chicago found a way to win that game. They were not so lucky last night as the Knicks outrebounded them by 12.

Once Williams went down with a wrist injury, things got worse as the Knicks were not only dominating on the glass, but picking up easy buckets around the rim. This will be a season-long issue for Chicago, especially when they face teams with tons of size. With Williams questionable for the weekend, other guys like Alize Johnson and Bryant will have to step up.

Eventually, this team will have to add more size, whether that be through a trade or free agency. Hopefully, when that happens, it isn't too late, as this team has all the potential to be one of the better teams in the Eastern Conference.

There was a time, around 30 years ago, when this rivalry was one of the best in the game. From the likes of Michael Jordan, Scottie Pippen, and Dennis Rodman on the Bulls to Patrick Ewing, Allen Houston, and company on the Knicks, these were two of the most successful franchises during the 1990s.

Both teams have been stuck in neutral for the better part of the last decade as they seemed to be on endless rebuilding paths. The Knicks put it together last year to make the playoffs for the first time since 2014, while the Bulls seem to be on the right track this season. Should that be the case, it would be the first time since 2014 when both teams made the playoffs.

With three games left between the teams, expect more of what fans saw last night. Not only that, depending on how things go this season, this has the potential of a future playoff matchup. The history of this rivalry runs deep, but things haven't been great for either side recently. However, those days are over.

Not only is this rivalry great for the league, but seeing the Bulls and Knicks starting to become successful again is excellent for this rivalry. There may not be as much hatred now as there was back in the 1990s, but make no mistake about it; these teams are going to leave it all on the court this season and will treat fans to plenty of intense matchups this year.