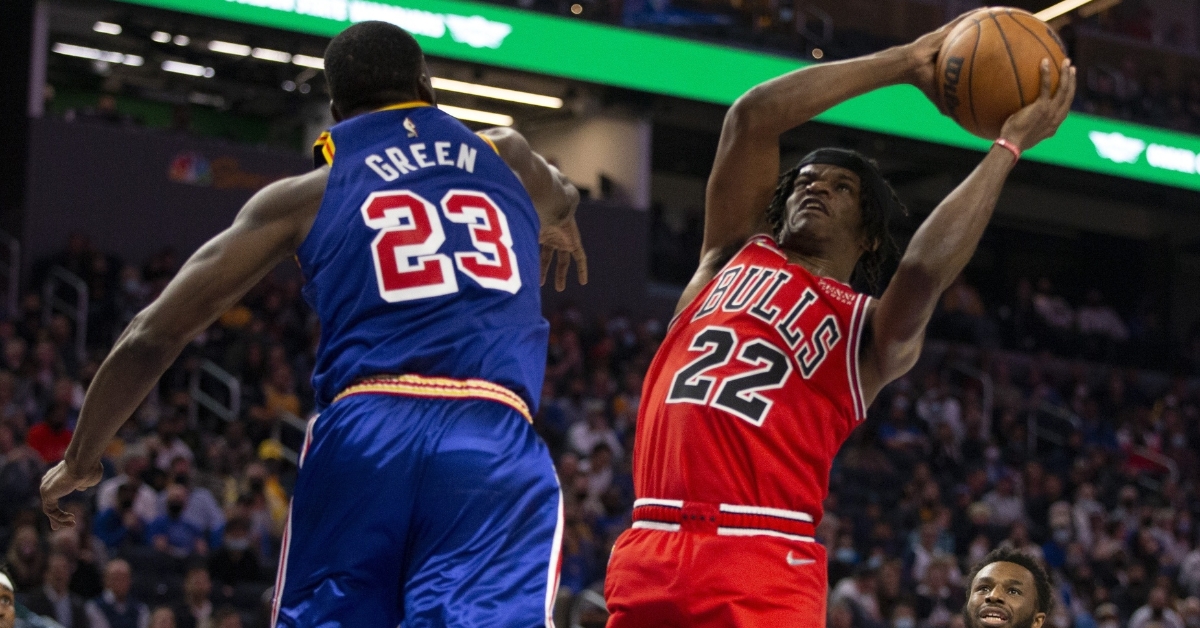 SAN FRANCISCO – It was a match-up of the best in the East vs. the best in the NBA record-wise last night as the Chicago Bulls (8-4) took on the Golden State Warriors (11-1). In-game one of what will be a five-game in eight days West Coast trip, the Bulls are about to find out how good they are, especially after Nikola Vucevic was ruled out for the entire trip with COVID.

Already down Patrick Williams and Coby White, the Bulls can't afford to lose many more pieces as the loss of Vucevic will be critical on this trip. It does appear that White may be healthy and ready to go at some point on this trip, but the Bulls really could have used his help last night as Chicago suffered their worst defeat of the season, 119-93.

With Vucevic out, guys like Tony Bradley Jr. and Alize Johnson will have to pick up the slack, and neither one is capable of putting up the performances he does. The two of them combined for just 12 points, but it was Johnson and his nine points off the bench putting in his best game of the season. That summed up the night for Chicago with Lonzo Ball struggling from the field to finish with five points and Javonte Green picking up just three as points were hard to come by for Chicago, especially in the second half.

DeMar DeRozan (18) and Zach Lavine (23) continued to lead the way offensively for the Bulls, who played exceptionally well in the first quarter before trailing by six at the half. The second half was a complete nightmare for the Bulls, as they were outscored by 20 in the second half, but it was the 35-17 third quarter put up by Golden State that hurt the Bulls.

Steph Curry continues to play at an MVP level and would be my pick for MVP at this point in the season. Not only did he drop 51 a few games ago, but after connecting for 40 points off of nine threes last night, he now has five 40 point games this season. Andrew Wiggins chimed in with 15 points, as did Jordan Poole with 14 as the Warriors continue to show why they are the best team in the league at this point.

The Bulls were bound to have a game like this sooner or later. However, fans are hoping this will not be the case for this entire trip as the loss of Vucevic may be more critical than anyone realized.

How good is Golden State?

Not that long ago, the Warriors were the class of the League, winning three NBA titles in four years. However, two straight years of injuries saw Golden State go from the NBA's elite to one of the worst teams in the League, helping them secure the No. 2 pick in the 2020 NBA draft. After doing a bit of retooling, the team was back in the playoffs last season, but lost in the tournament's play-in round.

This season is a vastly different story as the Warriors are looking like the Warriors of old. Keep in mind that Klay Thompson is still out with an ACL injury which begs the question as to how good this team can be? Through three weeks, this team is miles above the rest of the League and has proven that on a nightly basis. Once Thompson comes back, they should be even better as Golden State has the potential to be celebrating once again this season.

The loss of Vucevic came as a shock to the organization, but it created an opportunity for another young face. 2020 second-round pick Marko Simonovic was called up from the Windy City G-League team and was added to the roster to take Vucevic's place. Although he didn't play last night, Simonovic will give the Bulls some much-needed size off the bench should Billy Donovan work him into the rotation.

As fans have seen from Arturas Karnisovas during his days at Denver, Simonovic is your classic overseas big man that can stretch the floor and do a lot of the little things. Karnisovas took note of that and drafted him in the second round of the 2020 NBA draft. After playing all his games in Serbia last season, Simonovic came stateside this year, where he was looking to contribute to the Bulls roster.

The first taste Chicago got of him was in Las Vegas during the summer league, where he started all five games. Across that time, he averaged 10.7 PPG while adding 7.6 RPG. The talent is there, but he has to do some finetuning to his game. Once the preseason unfolded, Simonovic played sparingly and eventually signed a two-way deal with Windy City. That is important because a two-way agreement lets him bounce between the NBA and G-League to get as much playing time as possible.

In his three G-League games, Simonovic was nothing short of impressive dropping consecutive 20 plus point games and averaging 10 rebounds per contest. It is unclear how much playing time he will get in Vucevic's absence, but he does have plenty to offer for this team in the future, so why not showcase it now.

Trouble on the way for Chicago

As if losing Vucevic wasn't bad enough, more trouble could be on the way for Chicago, and it might sting. Even though the Bulls were able to acquire Ball this offseason, many teams across the League felt Tampering was done. The NBA feels the same, and they have been investigated for Tampering all offseason with the Miami Heat.

Although quiet since the season started, the tampering process is now in the advanced stages, which is not good. Typically when this happens, it means the League has enough evidence to charge a team with Tampering, and that will be deadly for Chicago. Not only would the Bulls face up to a 10 million dollar fine which could hurt in terms of their pursuit to resign Lavine, but they could lose draft picks in the process, which they don't have a ton, to begin with.

Karnisovas could also face a suspension as executives usually get the raw deal during an investigation like this. For all the good the Bulls have done this offseason, something like this would completely erase that progress and could have a lasting impact on what this team can do in the next few years.