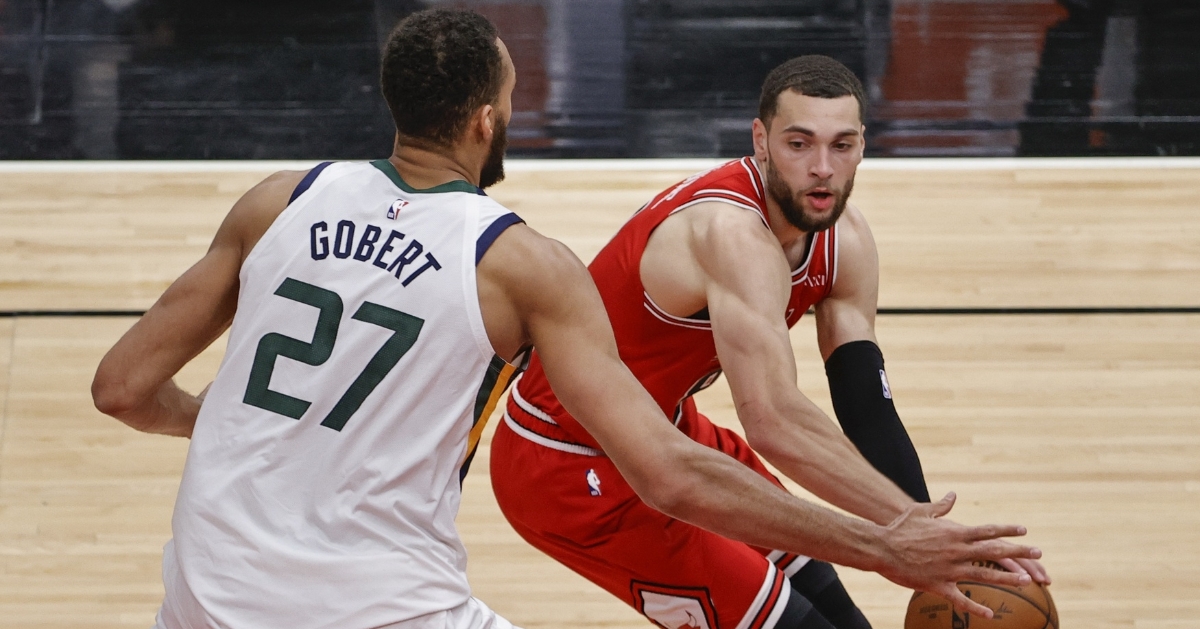 The Jazz were too much for LaVine and Co. (Kamil Krzaczynski - USA Today Sports)

On the second leg of a back-to-back, the Chicago Bulls welcomed a Utah Jazz team eager to end their road trip with a win. Despite a sluggish start to the second half, Utah still boasts the best record in the Western Conference, and they showed Chicago exactly why.

Along with one of the best defenses in the NBA, Utah also has perhaps the deepest team, which will pay dividends later come playoff time. Their overall depth and skill were way too much for the Bulls to overcome as Chicago dropped another contest at home 120-95.

As good as the Jazz were most of the game, they were not particularly sharp in the first quarter, especially early on. The Bulls had a game plan in mind, and that was to attack the paint and go after big man Rudy Gobert. That worked to perfection early as Lauri Markkanen, Zach Lavine, Thaddeus Young, and Patrick Williams connected for buckets inside, helping Chicago to a 10-5 lead.

From that point on, it was all Utah as the Spyder Donovan Mitchell began to settle, connecting on several triples as he continues to shoot a career-best from deep. He scored 10-straight for Utah at one point in the first quarter until others like Bojan Bogdanovic started to get involved. Even with that, Coby White knocked down a three-pointer to keep the Bulls in front.

Following a Zach Lavine three that gave Chicago a 23-20 lead, Utah closed out the quarter on a 9-0 run using a pair of threes from Jordan Clarkson and Joe Ingles to put everything in motion leading 29-23 after one. That 9-0 turned into a 19-0 run as Utah started the second quarter on a 10-0 run with Ingles continuing to deliver from deep. Chicago finally put an end to the run when Young went inside, but Mitchell's outside shot helped Utah maintain a 17-point lead 48-31. Led by Lavine and Young, Chicago was able to close within 12 at one point but still trailed 56-42 at the half.

Unable to allow another big Utah run, Royce O'Neale got involved in the three-point fun as that continues to be a big part of Utah's game. That paved the way for Bogdanovic on the inside and Michael Conely Jr outside, pushing the Jazz lead up to 21. From there, it was the Lavine Tomas Satoransky show as the two of them put the team on their back to bring the team back. Their play allowed others like Wendell Carter Jr to get involved, but once again, Utah had all the answers, with Gobert going to work down low to maintain an 89-71 lead. Gobert finished with 21 points and 10 boards while registering a career-high nine blocks.

Playing with a bit more confidence lately, Daniel Gafford finally got into the game late in the second half and made his presence felt inside early. Otto Porter Jr also waited until the fourth quarter to get involved as the Bulls started their bench unit in the fourth and had things within 14. Much like most of the game, whenever the Bulls had some positive momentum going, Utah had answers as this time Gobert went back to work around the rim.

That opened things up for Clarkson and Derrick Favors as the Bulls had no answers to stop the Jazz. Despite a quiet second half, Mitchell still led all scorers with 30 points, and the Jazz rolled the Bulls 120-95 to improve to 31-11 on the season while the Bulls fall to 19-23. Lavine led Chicago with 27 points, with Young and Williams adding 14 and 13 apiece.

The Utah Jazz are good

Not only do they play sound defense all game long, but they have an extremely deep and talented lineup filled by stars and underrated players. Gobert is one of the better defensive centers in the game that is getting better offensively. Both Bogdanovic and Ingles are great offensive players who are often overlooked, and when you add in the start power of Mitchell and the leadership of Conley Jr and you have a complete team.

Along with all that comes Quin Snyder, who quite possibly could be the most underrated coach in the NBA. The former Duke University star, Snyder, has built a foundation predicated on defense, and his offense feeds off that. His Jazz team is very impressive, and they are a fun group of guys to watch with so many players capable of beating you.

Even with the losses piling up to start the second half, the Chicago Bulls remain right in the thick things. Even with a 19-23 mark, Chicago is currently sitting in ninth place in the Eastern Conference and is less than two games out of the eighth seed. A typical season would have the Bulls on the outside looking in, but with two additional playoff teams being added for a play-in tournament, Chicago would be in the postseason right now.

What is even more surprising is the position the Bulls are in to possibly go on a nice run. Even with their record being what it is, Chicago has shown they can compete and has left several games on the table they should have had. They also have a stretch of seven winnable games coming up where the Bulls could do some serious damage.

Looking at the rest of the Eastern Conference and the Bulls are just 2.5 games out of the 4th seed in the East. If Chicago can not necessarily get hot but put together a nice run, playoffs will not only be coming full circle, but the Bulls will have a chance at a winnable first-round game and become the surprise team in the East.

As we approach the NBA Trade Deadline on Thursday, the Bulls will face some tough decisions within their roster. Both Porter Jr and Young were on the trade block when the season started, but as this team has continued to remain competitive, they no longer seem to be for sale.

When you look at the rest of the East and the teams the Bulls are chasing, what is one thing they have that Chicago doesn't? The answer is a PG which is something the Bulls have been searching for. Guys like Kyrie Irving, Ben Simmons, Jrue Holiday, Trae Young, Kemba Walker, and others all play in the Eastern Conference and they all run teams ahead of the Bulls in the standings.

Chicago would love to get in on that mix and have someone running the show, which is why Lonzo Ball continues to be a name surfacing around Chicago. Unlike other leagues, the NBA is a deadline day in terms of trades, and Thursday should be an interesting one for this team.