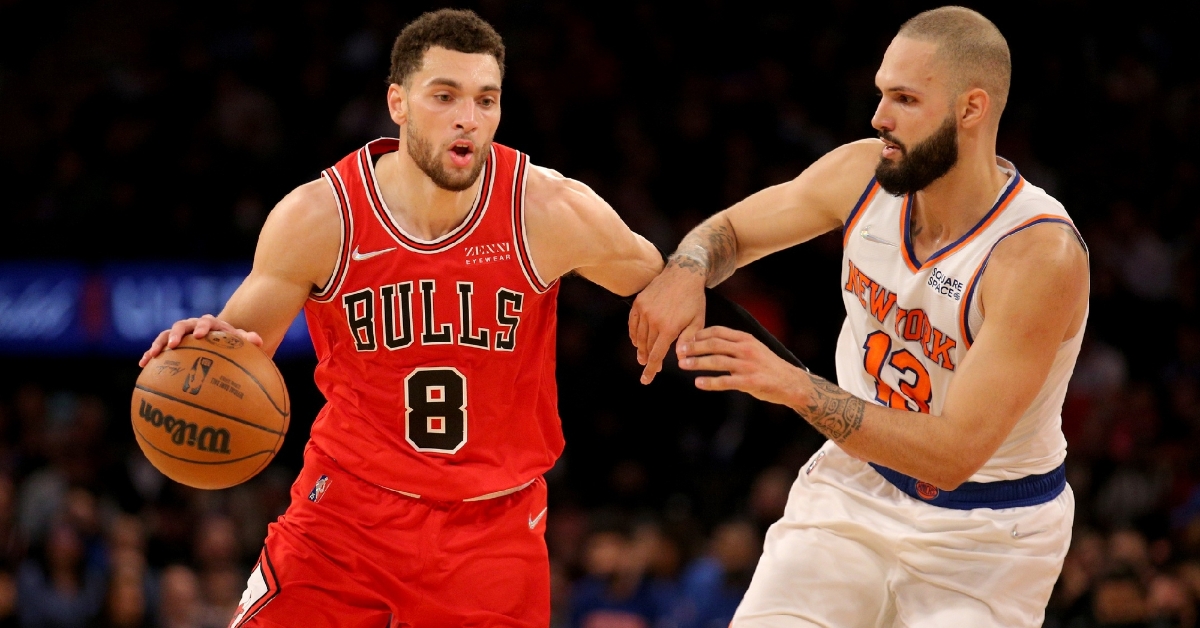 NEW YORK – For as good as the Chicago Bulls (15-8) have been this season; they are still frustrating to watch sometimes. Those frustrations came full circle against the New York Knicks (11-11) on Thursday night. With the help of a frustrated Knicks team that saw Taj Gibson get ejected in the first quarter after a double technical, the Chicago Bulls used that to their advantage, building an 18-point first-quarter lead.

They maintained that 18-point lead into the half and at one point held a 21-point advantage against a good, but struggling Knicks team. A big reason for their lead was the new-look Chicago trio, who started to play the way Billy Donovan and Arturas Karnisovas dreamed. Not only did DeMar DeRozan lead all scorers with 34 points, but Zach LaVine and Nikola Vucevic added 27 points each to back him as those three accounted for nearly 90 points on the evening. Should that type of production continue, the Bulls will be hard to beat.

Outside of those three, Chicago didn't have anyone else in double figures with Lonzo Ball and his eight points the next highest on the team. Holding that 21-point lead, you would think that the Bulls would be on cruise control the rest of the night with the game seemingly in hand at that point. That was not the case, as Tom Thibedeau wouldn't let the Knicks go away without a fight.

Despite the frustrations with the officials in the first half, Thibs and the Knicks seemed to use that to their advantage, which helped fuel a huge second-half run. Led by Julius Randle and his 30 points, The Knicks came out firing in the third quarter, outscoring them 25-10 at one point to pull within three. While Randle was the lone player to drop more than 20 points for the Knicks, New York had plenty of contributions that helped them make things interesting down the stretch.

Evan Fournier and Alec Burks added 16 points from the starting lineup, with Immanuel Quickley chipping in with 15. The Knicks also saw Derrick Rose continue his strong start to the season as he added 16 points off the bench as the Knicks continued to fight back before taking the lead in the fourth quarter. That didn't bode well for Chicago, but they were not about to let this lead go away as Alex Caruso and the defense tightened things up when they needed to the most and pushed their way through to a 119-115 win. The win moves them to a season-high seven games above .500 as their excellent start to the season continues.

Your Coach of the Month

There have been plenty of things to like about this Bulls team this season as they lead the Eastern Conference again. From the way the team has looked on defense to their new offensive weapons coming together at the perfect time, the Bulls are locked and loaded and ready to make some noise this season.

Lots of credit has to go to Donovan and his staff, as he has done a great job putting this team in the best position to succeed. The league certainly feels that way also, as Donovan took home November coach of the month honors. The last time a Bulls coach took home coach of the month honors was in 2011, when Thibedeau took home the same honor. Things are looking better and better for this team as they continue to play through some adversity.

After missing Vucevic for 10 days dealing with the NBA health and Safety protocols, the Bulls saw him return to the lineup late last week as the team was finally at near full-strength again. Well, once again, the Bulls were dealt with a tough blow as Coby White is now missing time dealing with COVID.

Although Chicago is one of the teams that have reached 100% vaccinations, White still has to follow the NBA health and Safety rules and will miss several games because of it. The 2021-22 season hasn't gone as planned for White thus far, as he missed the first few weeks recovering from offseason shoulder surgery, and now this.

When on the court, White has been inconsistent at best this season, but he is coming back from a shoulder injury that saw him without basketball activities for six months. On the flip side, White has shown plenty of potential this season coming off the bench, and the Bulls know what he is capable of when he sees consistent time on the floor. So far, this team has been able to adjust on the fly, and that will continue to be one of the things that set them apart from the rest of the league.

Billy Donovan said he spoke to Coby White and his initial experience with COVID is similar to Nikola Vucevic’s. Feels like he has a cold. Vucevic ended up worsening a bit as his case progressed.

Play the game and not worry about the refs

The Knicks are not the only teams showing frustrations with officials this season, as several teams have complained about recent calls. The Bulls are one of those teams that have voiced their displeasure with the officiating, and it did affect them during some of their contests.

However, as everyone knows, you have to play the game and not worry about what officials do or say. The Knicks were not happy during the first quarter, and you could see how much it was affecting them. They let calls get in their head, saw a player get tossed, and just looked out of sorts. The Bulls used that to their advantage to build a massive lead which proved to be just enough to win.

Had the Knicks let the calls happen as they did, who knows how this game would have turned out. The Bulls have gone through their own issues with officials and are learning to shut up and play the game.