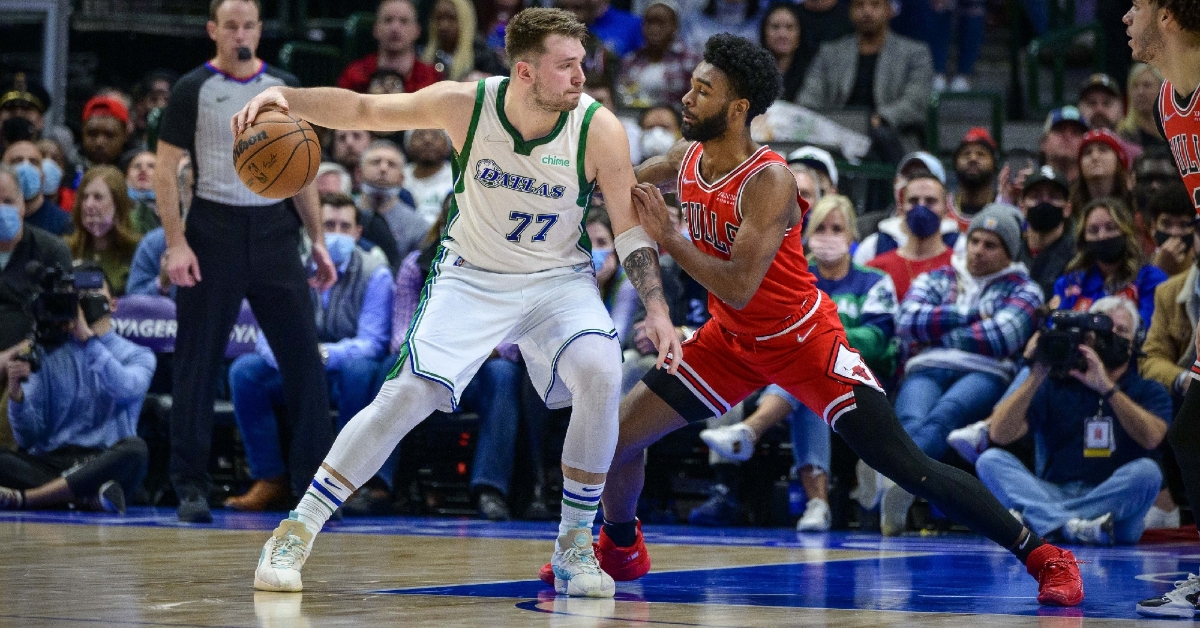 Dallas – At some point, you had to know that the Chicago Bulls (26-11) would lose a game. Entering Sunday's contest riding a nine-game winning streak, the Bulls have been one of the hottest teams in the league, even if a lot of those wins haven't been impressive. Despite that, a win is a win in the NBA, and this team has found ways to win games in various ways.

Looking to keep their mojo going, the Bulls traveled to Dallas on Sunday night to take on the ever-improving Mavericks (22-18). Despite a roaring start to opening the game, which saw the Bulls lead by 10 after the first quarter, Dallas outscored Chicago over the final three quarters, including outscoring them by 10 in the fourth to pull away 113-99 for the win and ending the Bulls streak.

Once again, the DeMar DeRozan and Zach LaVine show led the way, although neither of them had a breakout game. Both players finished with 20 points to lead their team, but neither had their signature takeover moment that the fans have been getting used to. LaVine especially struggled when it came to shooting the ball, going 7-21 from the floor, which didn't help the Bulls at all.

Outside those two players, the Bulls had two other players land in double figures, with Nikola Vucevic and Coby White putting in 13. Vucevic saw his streak of double-doubles come to an end as he finished with just six rebounds ending a 20-game double-double streak. White continues to play well off the bench and has fully asserted himself into more of a sixth man role.

When you have DeRozan and LaVine scoring nearly 15 points less than they typically do, it will take more than just two players in double figures to make up the difference. Derrick Jones Jr and Lonzo Ball tried to balance out the difference, but with 18 combined points between the two of them, you knew it was going to be one of those nights where the offense was tough to come by.

For the Mavericks, they have flown under the radar all season and are now starting to play well at a good time. As expected, the offense goes as far as Luke Doncic will take them, and he played well last night. Not only did he drop a game-high 22 points, but he added 14 points and dropped 14 assists for a huge triple-double. Maxi Kleber added 18 points from the starting lineup, as did Josh Green off the bench giving Dallas a nice trifecta of an option.

Jalen Brunson continued his excellent season with 17 points along with Dorian Finney-Smith (12) and Dwight Powell (10), as all five of the Mavericks starters had double-figure days. Combine that with their tough defense and a rough shooting performance in the second half for the Bulls, and you get the result you had with Chicago dropping their first contest in 10 tries.

Time to start a new streak

No one wants to lose games, but that will happen when you play an 82-game season. The key to having a great season is to limit those losses which the Bulls have done. Through 37 games last year, the Bulls were sitting at 18-19 and holding the No. 6 seed in the Eastern Conference. That prompted them to trade for Vucevic, where a nine-game losing streak followed, and they couldn't recover.

Not only are they 16 games better this season, but their latest winning streak gave them some breathing room on top of the Eastern Conference, where they continue to hold down the top spot. This season, Chicago is one of the few teams to avoid a three-game skid, and they would like to get back on the winning side of things sooner rather than later.

Where does Alex Caruso fit when he returns?

One of the more impressive things regarding the Bulls has been their ability to win this many games without being healthy for a single game this season. A big reason for that is having so many different faces step each night, which makes a good team. Chicago is as close to being at full-strength as they have all season, but are still missing two pieces at this point in the season.

Alex Caruso is one of those pieces, but expect him to return in the next week or so. Caruso has been nursing a foot injury for the last few weeks, but has also been placed in COVID protocols. It will be interesting to see where he fits on a role-wise side of things when he returns. DO the Bulls move him into the starting lineup to replace Jones Jr, or do they stash him on the bench with White giving Chicago two great options off the bench.

Whatever role he takes will be critical as the Bulls do miss his tenacity on the court. He is a great defender who isn't afraid to defend anyone and leads the league in steals. He is a big reason the Bulls are a top 10 defensive team, and the sooner he gets back, the better.

When looking at DeRozan and the season he has had this season, you have to nitpick about things that have gone wrong. He leads the team in scoring, is playing at a high level, and is in the MVP conversation through the first half of this season. Even with some recent struggles when it comes to shooting, you can still count on him to give you 20 points as that is the player he is this season.

One area that has suddenly been an issue for him is free throw shooting which is a mystery. An 83% career free throw shooter who is shooting 84% this season, DeRozan is near automatic from the line. That hasn't been the case his last five games, where he is suddenly just shooting 60% over those games.

That includes a 52% performance against Orlando on Monday and a 50% showing last night going 2-4. For whatever reason, his free throws are not falling for him right now, and it isn't because he is not trying. After the game on Monday, he spent over an hour shooting 250 free throws trying to figure out why he has been missing.

This is just part of the game of basketball. Sometimes you go through stretches where you can't miss shots, and then there are parts where the bucket seems smaller than normal. The free throw line is a struggle for DeRozan, but don't expect this to linger much longer.